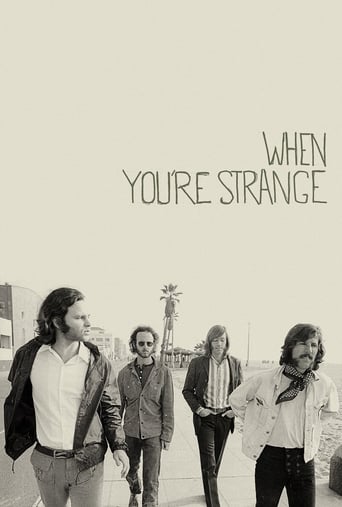 The creative chemistry of four brilliant artists —drummer John Densmore, guitarist Robby Kreiger, keyboardist Ray Manzarek and singer Jim Morrison— made The Doors one of America's most iconic and influential rock bands. Using footage shot between their formation in 1965 and Morrison's death in 1971, it follows the band from the corridors of UCLA's film school, where Manzarek and Morrison met, to the stages of sold-out arenas.

A look at the late '60s and early '70s rock band The Doors| including rare exclusive footage. Great documentary on The Doors. RELEASED IN 2009 and written & directed by Tom DiCillo, "The Doors: When You're Strange" documents the rise and fall of The Doors from 1966-1971, narrated by Johnny Depp. From beginning to end, archival footage and photos of the band are featured focusing on the members: Ray Manzarek (keyboardist), Robby Krieger (guitarist), John Densmore (percussionist) and, especially (of course), Jim Morrison (singer/lyricist). I’ve only seen two documentaries on The Doors, the one featured on Oliver Stone’s “The Doors” (1991) DVD, which features modern interviews with the band members & linking people (like Morrison’s witchy former babe, who loathed the movie), and this one. Both documentaries are great, but “The Doors: When You’re Strange” doesn’t focus on modern interviews, although some of the luminaries are asked questions in the archival footage. The documentary is just transfixing from beginning to end and features 37 songs by the iconic band. Depp is, surprisingly, an excellent narrator and not goofy at all. Even if you’re familiar with the band you’ll probably gain some new tidbits. For instance, the band curiously never had a bass player, although Elvis’ bass player performed on their last album; as such, keyboardist Manzarek made up for it by essentially playing bass on one hand. Manzarek, by the way, passed away in May, 2013, at the age of 74. THE MOVIE RUNS 1 hour 25 minutes. GRADE: A

Downloading Seeding When.Youre.Strange.A.Film.About.The.Doors.2009.720p.BluRay.H264.AAC-RARBG from to 0 peers.
of
↘0 b/s / ↗0 b/s
Read our blog post about Streaming Torrents From Your Browser