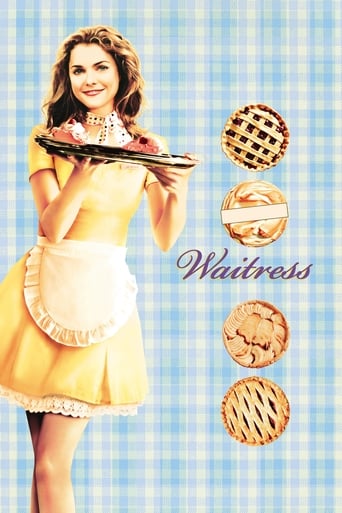 Jenna is a pregnant, unhappily married waitress in the deep south. She meets a newcomer to her town and falls into an unlikely relationship as a last attempt at happiness.

Jenna is unhappily married, squirreling away money, and hoping to win a pie-baking contest so, with the prize money, she'll have enough cash to leave her husband Earl. She finds herself pregnant, which throws her plans awry. She bakes phenomenal pies at Joe's diner, listens to old Joe's wisdom, tolerates her sour boss Cal, is friends with Dawn and Becky (her fellow waitresses), and finds a mutual attraction with the new doctor in town. As the pregnancy advances, life with Earl seems less tolerable, a way out less clear, and the affair with the doctor complicated by his marriage. What options does a waitress have? Greetings again from the darkness. Very personal and intimate story from the very talented Adrienne Shelly. Ms. Shelly was tragically murdered before the film was released, but what a legacy and gift she left for her husband, daughter and film lovers.Keri Russell ("Felicity") stars as Jenna, a fabulous pie maker who is a lost soul married to the world's worst husband - played brilliantly by Jeremy Sisto. She works at a diner with her two friends played wonderfully by the bubbly Cheryl Hines and the film's writer and director, Adrienne Shelly. The relationship between these three is very realistic, touching and entertaining. They love and cherish each other.Outstanding support from Eddie Jemison ("Ocean's Eleven, Twelve and Thirteen"), Nathan Fillian ("Serenity") and the great Andy Griffith, who has some great lines and definitely should work more often!! Jemison's spontaneous poetry capture the heart of Ms. Shelly's character and Fillian's Dr. Pomatter shows Russell what it is like to be adored, rather than abused.This is not slick Hollywood film-making. It is quirky ... just like real life. These are characters, who for the most part, make the best of their situations. Every now and then, if we are lucky, we capture a moment of pure bliss ... whether it is in the selfless hug from another, or the miracle of childbirth. The script analyzes loneliness and bad relationships with a twist of humor and much insight.While it is heart-breaking that Ms. Shelly did not live to see the final product, we see her heart and soul on screen. And don't miss her real daughter (Sophie Ostrey) as Ms. Russell's 3 year old LuLu. This is a wonderful little film with some terrific moments and a nice message to enjoy your life.

Ever since the Felicity days I've loved Keri Russell, so I was excited to see a screening of this in Santa Monica a week or so ago. I also have enjoyed Nathan Fillion in Serenity and the short-lived show Firefly that preceded that. But even with those expectations I was pleasantly surprised with this movie. It seems like in the past few years movies have become (or maybe they have always been) incredibly predictable. You go see a romantic comedy and it's almost like you can write the next line. I don't know about you, but I kind of like not knowing what is going to come next. That is part of the intrigue. The characters in this movie were diverse, funny, and completely endearing. In Waitress the dialogue is surprising and different. I really enjoyed the quirkiness of the characters. The crowd I viewed this movie with spanned many generations and it seemed to me that nearly everyone was laughing and enjoying themselves. I would recommend this to guys, girls, whoever...if you go in thinking it is going to be like every other movie you will really be happy when you leave the theater. I am definitely going to see it again when it is released this weekend.

I have been a big Adrienne Shelly fan since her early Hal Hartley movies and also saw her uneven but touching "I'll Take You There," where she brought out the screwball in Ally Sheedy without sacrificing her edge. Here she brings out a deeply funny, authentic and moving performance from Keri Russell, a performer I did not dislike but never thought a lot of before this film. She also casts the rest of the people impeccably, A#1 being Andy Griffith;if you've ever seen "A Face in the Crowd" you know that he is one of the titanic largely untapped acting talents of the last century. His scenes with Ms. Russell make up the true heart of this small but mighty film. Jeremy Sisto is perfect as well, his character is not given any background beyond the fact that he changed after marriage, but Sisto constant vulnerability mixed with his monstrosity and telling lines like "I've never had anybody belong to me before," seem to indicate that he became drunk with the power of authority when he entered the marriage and his own fragile sense of power caused him to be the (often hilarious, as with the car honking, often terrible, as with the physical violence) broken, absurd and terrible person he is in the film. Eddie Jemison shines in a part that is really risky, he has to be even more overbearing than Sisto's character, but to be the exact opposite, to be actually worthy. Shelly herself and Cheryl Hines are solid in their support (Shelly is adorable), but keep the spotlight firmly on Ms. Russell. Nathan Fillion has been perfect in everything I've ever seen him in, and his open and unpretentious, handsome semi-doofus-but-convincing-as-a-doctor character shows a broader range than his heretofore role as a sort of new-wave Bruce Campbell.Unfortunately the film loses its footing towards the end with sentiment overtaking the sensibilities preceding it. A maudlin and manipulative mother-daughter song is obviously ADR and not source, and it relies upon the old "everything changes when you see your baby" switcheroo. Then she leaves the hospital without even checking on Old Joe, who just gave her tons of money and is currently in a coma (presumably because to have him just dead would bewhat, too much of a downer? A coma is better?), then she buys the pie shop and takes Joe's name off it, which doesn't seem very nice. She gives up any chance for a balanced life and lives entirely for her daughter, who she dresses like a doll and then dresses up the same as. She also ditches the doc who, while married to a good person, obviously loves her more than his wife.It is through the outright charm of Fillion and Ms. Russell that the entire affair is able to come across as not-as-not-right as it is. But for it to go nowhere brings back the creepiness about it they managed to turn away. The whole first 2/3 of the movie is pretty excellent, but I can't ignore that I was really let down by the way it all wrapped up. Up until that point there is a sense of genuine feeling and a level-headedness about, for example, how difficult it must be to leave even someone like Earl and everything you know, not just making it seem easy. Then at the end she just does it, he is dragged off, apparently never gives her more trouble and it actually was just that easy.Ms. Shelly was undeniably very very talented and her death is a great loss to the film community (and so sad that the little girl at the end is hers), maybe her next one would have been 3/3 excellent. I think I'm going to go eat some pie now.