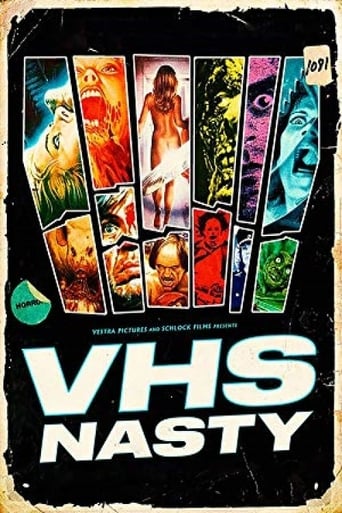 In the 80’s, a legendary cult following like no other developed during the VHS era, those that loved The Video Nasty! Explore all the greatest cult video titles such as Faces of Death to Cannibal Holocaust.

VHS Nasty is part 3 in the infamous cult VHS doc series "VHS Lives". In the early 80's| VCR players were in every house| but a legendary cult followingdeveloped during the VHS era like no other| those that loved The Video Nasty! With video stores on every corner during the VHS boom| they were flooded with anarray of horror the likes of which we will never see again. The sleeve art was awesome and these unregulated horror| gore and sexploitation films rocked beforethey were eventually banned in the UK and the hysteria started to spread across the globe! VHS Nasty delves deep into the cult classic satanic panic that is thevideo nasties| taking an in-depth look at censorship within horror films specifically the video nasty scandal that shook not only Britain in the early 80's| butshook the world into a frenzy of panic! Talking about cult video nasties such as Faces of Death| Cannibal Holocaust| The Texas Chainsaw Massacre| Driller Killerand many more. Brought to you by Tony Newton ...