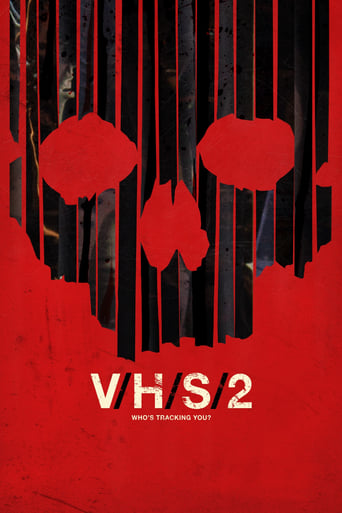 Inside a darkened house looms a column of TVs littered with VHS tapes, a pagan shrine to forgotten analog gods. The screens crackle and pop endlessly with monochrome vistas of static white noise permeating the brain and fogging concentration. But you must fight the urge to relax: this is no mere movie night. Those obsolete spools contain more than just magnetic tape. They are imprinted with the very soul of evil.

In the past I have only ever reviewed anthology films as a whole, and by-and-large that's probably what I'll go back to doing in the future, but having just watched the last three quarters of the original _V/H/S_, then _V/H/S/2_ and _V/H/S: Viral_ all in one sitting, it all sort of bleeds together and I mostly can't remember which one belongs where, so at least for now, I'm gonna try giving some very, very short reviews for each segment, rather than the overall films. **Tape 49**: The framing device. These were always the silliest part of the franchise. It doesn't work very well as a jumping off point, and it doesn't work at all as a self-contained narrative. **Phase I Clinical Trials**: Much better stuff from Adam Wingard, has some of the intensity found in the first _V/H/S_. One of the shorts I think would best translate to a full feature. Could benefit from some better acting though (could be said of all the segments, and isn't a deal breaker for me). **A Ride in the Park**: Really just one thing going on here, but that's fine for a short film that's just one part of an anthology. A first-person zombie movie shot from the perspective of the zombie is a pretty dope idea. Could have commited to the formula harder, preferably, but the way it is shot I guess makes sense in terms of the larger _V/H/S_ narrative. **Safe Haven**: The best of what _V/H/S/2_ has on offer. Not perfect, and unexpectedly made me bring out my glasses to read the subtitles, which I guess arguably clashes with not only the other segments but indeed the "Found Footage" idea overall. Still, solid entry. **Slumber Party Alien Abduction**: Probably the weakest. Weird choice to go out on. Tries to have fun but unfortunately just doesn't have the time to carry that idea to fruition before the desperate scramble for the "horror" in this found footage horror short. _Final rating:★★½ - Had a lot that appealed to me, didn’t quite work as a whole._

Downloading Seeding VHS 2 2013 WEBRiP XviD-RiPRG from to 0 peers.
of
↘0 b/s / ↗0 b/s
Read our blog post about Streaming Torrents From Your Browser