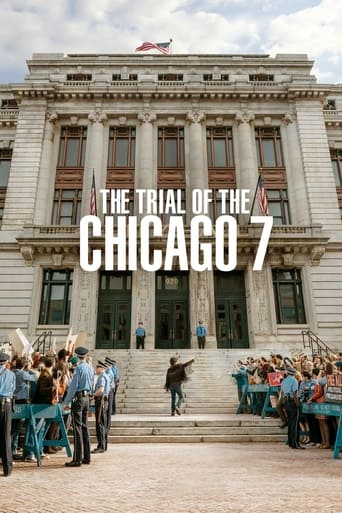 What was supposed to be a peaceful protest turned into a violent clash with the police. What followed was one of the most notorious trials in history.

In Chicago 1968, the Democratic Pary Convention was met with protests from activists like the moderate Students for a Democratic Society led by Tom Hayden and the militant Yippies led by Abbie Hoffman and Jerry Rubin, which led to violent confrontations with the local authorities. As a result, seven of the accused ringleaders are arraigned on charges like Conspiracy by the hostile Nixon administration, including Bobby Seale of the Black Panthers who was not involved in the incident. What follows is an unfair trial presided by the belligerent Judge Hoffman (No relation) and prosecuted by a reluctant but duty-bound Richard Schultz. As their pro bono lawyers face such odds, Hayden and his fellows are frustrated by the Yippies' outrageous antics undermining their defense in defiance of the system even while Seale is denied a chance to defend himself his way. Along the way, the Chicago 7 clash in their political philosophies even as they learn they need each other in this fight.

Sacha Baron Cohen has now delivered my 2 favourite & memorable characters of the year in the same fortnight. This movie is a strange incongruence. It inspired/engaged/enraged me at the same time as it made me feel flat. It could have been longer (the time flew by) and drawn out the characters more, but I felt that it had said what it needed to say. And the melodrama felt just above where it needed to be. Having said that, the editing is top notch and the performances are at least "on par", if not outstanding (Baron Cohen, Abdul-Mateen II, Rylance and Langela). And regarding the Direction - its not perfect, it likely would have been better done in the hands of a master. But if this was my second film, I would be f$%^ing stoked. Watch this movie.

It is important for a film to say what it wants to say correctly and to somehow overcome its claim. "The Trial of the Chicago 7" is one of these films. A coherent narrative with a perfectly acceptable script and no extra glamor. Adapting in cinema has always been a difficult task, whether from another literary work or a real event. The film also manages to make this historical adaptation and not only shows the details well, which gives it a new spirit with the art of cinema, so that it has the necessary impact on the audience. An important point is that the film is successful in creating a feeling and does not seek to hide its weaknesses by crowding the film by using unnecessary Techniques or tricks. Throughout the film, we see a variety of emotional atmospheres that are sometimes very lively and sometimes very calm and quiet. The director, however, has been able to create emotion both in crowded spaces and in the silences, that sometimes take the audience to a deeper layer of the movie. The actors in the film are all acceptable, However, some of them do not become characters in the script, and in the meantime, “Langella” acting as the judge and “Sacha Baron Cohen” as Abbie was better than others. “Sorkin” has once again shown that he has an acceptable ability in screenwriting, and this time he has performed well in directing too. “The Trial of the Chicago 7” is a compact movie that works to the best of its ability And it tries to get closer to the form, though it cannot be said that it has done it completely, but in some places it gets close to the form. It should be noted that the film is very successful in its purpose and the use of old images and videos helps to convey this purpose to the viewer. What this film has done, that is, create a sense of criticism and sometimes hatred for a corrupt system, is something that not every film can easily do. In general, “The Trial of the Chicago 7” is a good movie that will be alive for a long time and anyone of any age and period can communicate with it.

You know what isn't superb? This was splendid! Although I don't know much about what's going around in U.S cause I'm from India, I felt it. I felt emotions from all over the place. The intensity was really high, the characters were so very well written with depth. The acting was really powerful and the casting... just marvellous choices there...Sacha baron Cohen, Joseph, Eddie redmayne and co. just wonderful, just wonderful.I think this film can be relatable for any country. This film captured the struggle of justice so well... the lines were so very well written! And the ending!!! So powerful!!Aaron Sorkin really is an absolute genius! He wrote this so well, such great dialogues, I absolutely love how his characters talk.The cinematography too was absolutely incredible! So fitting!Just brilliant, best film of 2020 for sure.

Strong acting performances that give life to an old story, as relevant in 1968 as it is now in 2020. The movie has High intensity and I wouldn't be suprised if it is awarded any prizes.

Legal historians and courtroom drama fans will have a field day with this Aaron Sorkin film which depicts the trial of eight radical protesters who made a name for themselves in Chicago during the 1968 Democratic National Convention. A disparate array of left-wing activists who took it upon themselves to demand an end to the Vietnam War instead became involved in the ghastly legal aftermath of the riots and thus faced criminal charges for allegedly instigating the violence. This film portrays the sham trial that took place.Jospeh Gordon-Levitt, who has not been in anything good for a long time, is solid as the lead federal prosecutor who reluctantly takes on the assignment of trying to put the radical protesters behind bars. Mark Rylance's modest, down-to-earth demeanor makes him a rather peculiar fit to portray defense attorney William Kuntsler, the famous defense attorney well-known for his outspoken courtroom oratory and publicity hound antics. Frank Langella is flawless as Julius Hoffman, the judge who presided over this trial and whose combustible temper and tenuous mental faculties made him a ready target for ridicule from many, including those involved in the case. Edie Redmayne is excellent as Tom Hayden, the more pragmatic but equally passionate protester and defendant. Sacha Baron Cohen and Jeremy Strong are both stellar as defendants Abbie Hoffman and Jerry Rubin, respectively. Finally, Yahya Abdul Mateen II is eloquent as Bobby Seale, a Black Panther Party co-founder and the lone African-American defendant in the case.There are discreet details about the trial I was hoping the film would cover. There is no mention of Bobby Seale's many colorful nicknames he assigned to the judge. It mentions the poet Alan Ginsberg only as a fellow protester, when in fact he was also called as one of several celebrity witnesses. So was the musician Judy Collins who began singing an anti-war song during her testimony. These, however, are minor oversights because the fundamental essence of this circus of a trial is effectively captured in the film. Unlike much of Sorkin's earlier work, the dialogue in this film is less grandiose and more straightforward. There are less pyrotechnics and more re-creation here. I mean that as a compliment. It's the perfect portrayal of a trial which turned out to be a low point in the history of American jurisprudence. It also expertly captures the schism within the American left and how the idealists and pragmatists often locked horns even back in the 1960s. Gripping, frightening and instructive in today's world, it is not to be missed. Highly recommended to all.