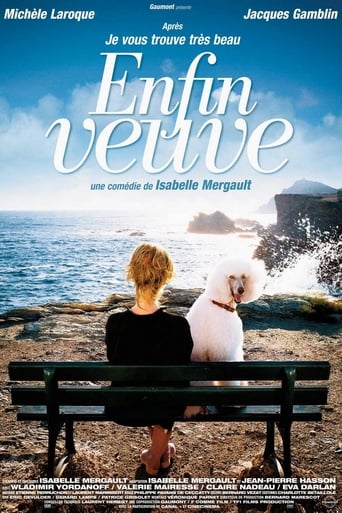 Anne-Marie lives an easy life with Gilbert, a rich plastic surgeon: a beautiful house, a doggy, a cleaning lady, expensive furniture, the lot. Not so easy in fact when she thinks twice. She does not get on with her husband any longer. She gets on his nerves and he does not attract her any longer. She feels good only when she jogs on the beach and ... when she is the arms of her lover, Leo. One day, Gilbert gets killed in a car accident. Good news, since she will be able to live with Leo. The trouble is her well-meaning family settle at her villa with a view to supporting the "poor widow" morally. Anne-Marie just cannot admit she is not distressed at all, especially to her son Christophe. She is now even more of a prisoner than when Gilbert was alive...

Anne-Marie lives an easy life with Gilbert, a rich plastic surgeon: a beautiful house, a doggy, a cleaning lady, expensive furniture, the lot. Not so easy in fact when she thinks twice. She does not get on with her husband any longer. She gets on his nerves and he does not attract her any longer. She feels good only when she jogs on the beach and ... when she is the arms of her lover, Leo. One day, Gilbert gets killed in a car accident. Good news, since she will be able to live with Leo. The trouble is her well-meaning family settle at her villa with a view to supporting the "poor widow" morally. Anne-Marie just cannot admit she is not distressed at all, especially to her son Christophe. She is now even more of a prisoner than when Gilbert was alive... 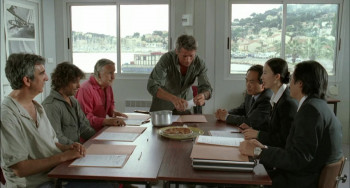 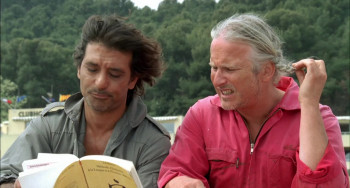 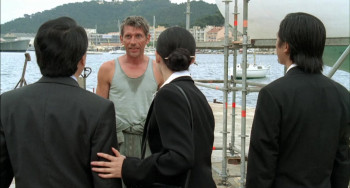 An optimistic film with a morale. Nothing is out of tune in this movie starred by Michele Laroque and then, the rest. Jacques Gamblin gives one of his stellar appearances, a hardened loner that can speak poetically seemingly at all the right moments.This film starts when most finish: we witness a solid love between a couple in their 40s. Another thing I like is that: am fed up of teenagers pretending to act when they can barely deliver lines :)! "Il Mio refugio", the music accompanying the end titles, is the best chosen soundtrack: it gives the exact nuance of a film that doesn't pretend much, and though not shying away from showing us feelings, achieves a lot. Léo gets better lines, but "Moumousse" could show with her regard that she is in love even to somebody who never learnt any (verbal) language! The hypocrisy of the sister in law, the fidelity but at the same time moral condemnation of the maid, and above all the leisurely times of a working class bar at ... (a coastal town, rather affluent) make this film a pleasure to the mind as well as to the senses. Her son, gullible but not devoid of dignity, is pivotal. Very well cast.Great shots of this seaside town, makes you almost want to have lived there all your life. Shot in different tows of the "Var" (?) county, in France. Thanks IMDb, as usual, for their obsessive interest in film! What would we do without you!It's no wonder this film was such a huge success.

"The Merry Widow" is a highly unusual comedy film as it does not rely on gimmicks and absurdities to tell the tale of a middle aged widow who manages to find her true love.Isabelle Mergault adds elements of drama in order to portray a difficult love story of Anne-Marie who has been recently widowed.In times of grief,family members provide succour but they have been ridiculed in this film.Enfin Veuve does not provide any easy solutions to its lovers in order to come closer.It makes people laugh as its protagonists get rid of all obstacles in their midst to unite.Actors Jacques Gamblin and Michèle Laroque are perfect in their roles as lovers who convey that widowhood is not a hindrance if a widow wishes to proclaim her love.There is hardly any film producing nation as prolific as France where women directors do not have to suffer any kind of prejudice to make films of their choice.If one looks at the films made by them,one would not fail to remark that many of them have been made by actresses who have had second innings as film directors.Isabelle Mergault has maintained a film per year in her three decade long career as an actress."Enfin Veuve" / The merry widow is her second successful film as a director after tasting success with "Je Vous Trouve Très Beau".

There was a scene in the excellent 1989 "War of the Roses" where Barbara Rose (Kathleen Turner) confessed to her husband Oliver (Michael Douglas) that the knowledge of his heart attack hadn't upset her at all, on the contrary, she felt like finally relieved from some life burden. That was a shocking revelation from a rather shocking film but it had the merit to highlight a tacit marital reality, it's only with the people that you spend most of your life with that such perversely mixed feelings can invade you.Even the best mother thinks of throwing her baby out of the window once in her life, it's a natural symptom of maternal psyche but when it comes to marriage, psyche takes a further step. The merit of "The War of the Roses" is to have broken that taboo, movies got us used to crimes motivated by vengeance, passion and insurance money, but not wives secretly wishing that Karma would get them rid of their husband, if not in a natural, at least a guilt-free way. "At Last, a Widow" swims in similar waters, it's not as dark and thought-provoking as DeVito's classic, but within its comical vaudeville aspect, it exposes the same reality, of a woman who came to a point she became devoid of any tender feeling toward her husband.The woman is Anne-Marie and she's played by the always-delightful Michele Laroque. Anne- Marie loves to jog at the beach, with headphones, singing romantic songs with the passion that seems to lack in her life. The movie opens with her repetitive attempts to meet her lover, Leo a handsome boat-builder played by Jacques Gamblin, and in the cuckold's role, Gilbert, a rich and cold plastic surgeon (Wladimir Iordanoff) is naturally oblivious to his wife's doings. But the rest of the world knows, and that includes Anne-Marie's benevolent housemaid (Valérie Mairesse) Leo's friends and all the brave people of that Southern seaside town. And obviously, Gilbert is the least likely person to solve the problem, he IS the problem. It's up to destiny to give a salutary hand.But here is a movie that could have gone for a more mean-spirited tone, I'm sure if it was an American film, the husband would have needed to be portrayed as a prick or even a wife-beater to make his death more acceptable. But Anne-Marie can never have a free moment, she can't even give her lover a call, and the less she can, the more it reinforces our empathy, this is not the cunning sexy cheating wife, but a goofy likable one and that makes for a more sympathetic 'merry widow'. And the first act of the film shows that the director, Isabelle Mergault, didn't go for the easy caricature but rather nuanced and realistic characters. I especially loved that beautiful moment where you'd just think an argument is about to break up in the car, but then, even the 'bad" husband holds his wife's hand and smiles at her. This is not just realistic but heart-warming.So, Gilbert isn't a bad husband and his death matters, and it's all justice that his loss doesn't lead to Anne-Marie's triumph. Indeed, his death unfolds the film's comedic premises: when Anne- Marie learns the news, she's shocked but you can't tell if it's joy or sadness. At this moment, the story takes a great turn because Anne-Marie is finally free to join her lover, if only she managed to get rid of the in-laws. This is a terrific premise that the script manages to handle as a great continuation of the traditional infidelity trope, but with a smarter twist, this time, it's the family to escape from. It's one thing to cheat a man but four or five persons, including a loving son, a jealous and suspicious sister-in-law and a senile father isn't the easiest task. I have reservations though on the son's casting, he looks like a weird combination of Hugh Grant with the supersized mouth of Owen Wilson and his facial expressions were too distracting, besides, he looked nothing like his parents, but anyway, the film made me smile a lot, chuckle many times and laugh at a few hilarious bits. One of the film's funniest moments occurs during the funeral Anne-Marie pretends to cry while in fact laughing her ass off. The humor is quite cruel regarding the late husband but the situations are dealt in such a lighthearted way and Anne-Marie is given such a bad break that it seems fair enough to laugh with it. The situations go as far as remembering the plot of the film she supposedly went to see or find a way to leave the house as discreetly as possible, I love how the film deals with such tiny details, even the writing of a farewell letter isn't as simple as it sounds.And I also love that this is not a sort of feminist pamphlet about abused wives, Anne-Marie wanted to be freed from her husband because she loved another man, she's still a woman in need for love and affection. This is why her climactic confession is a very powerful moment. But I have one regret. A simple one. It's like being given a good meal and one missing ingredient spoils the whole taste. There was one scene missing in the film: Anne-Marie visiting the cemetery and telling the truth in her husband's grave. Granted she felt nothing at this death, but I wouldn't believe that such a significant event wouldn't have an emotional aftereffect, and if he didn't deserve her love, he deserved at least the truth. Of course, he's dead and that wouldn't have changed anything, but I thought that scene would have made Anne-Marie really come full circle with herself.For such a good scene, the obligatory happy-ending would have worked, instead, I liked the film, but I feel like some great potential was wasted.