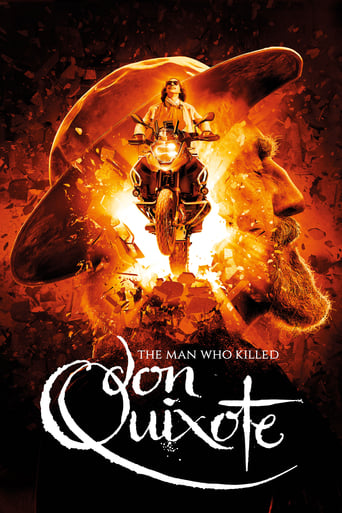 Toby, a cynical film director finds himself trapped in the outrageous delusions of an old Spanish shoe-maker who believes himself to be Don Quixote. In the course of their comic and increasingly surreal adventures, Toby is forced to confront the tragic repercussions of a film he made in his idealistic youth.

Toby| a disillusioned film director| becomes pulled into a world of time-jumping fantasy when a Spanish cobbler believes him to be Sancho Panza. He graduallybecomes unable to tell dreams from reality.

Notes ....: We combined elements from the US bluray with ones

32mpbs), which is also blurrier and less detailed.

Vobsubs were muxed in also for the US disc subs,

as the sups display partially out of range on mpc when

played in native res (not in full screen).

Downloading Seeding The.Man.Who.Killed.Don.Quixote.2018.INTERNAL.1080p.BluRay.X264-AMIABLE from to 0 peers.
of
↘0 b/s / ↗0 b/s
Read our blog post about Streaming Torrents From Your Browser