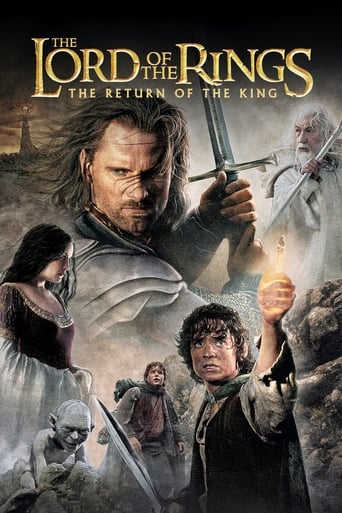 Aragorn is revealed as the heir to the ancient kings as he, Gandalf and the other members of the broken fellowship struggle to save Gondor from Sauron's forces. Meanwhile, Frodo and Sam take the ring closer to the heart of Mordor, the dark lord's realm.

And so all good things come to an end. For three years in a row, Peter Jackson has banished our winter blues with the individual instalments of his Tolkien trilogy, effectively shifting the focus of our cinematic excitement from the summer months to the end of the year. But now that his epic has been unveiled in its entirety, what will be the lasting effects of his achievement? Well, grand-scale fantasy filmmaking is back on the menu, laying down the gauntlet to George Lucas and Star Wars Episode III. Jackson has also proved that notions of risk and ambition needn't be confined to the low-budget, indie end of the spectrum; nor does California have an exclusive stranglehold on groundbreaking special effects. And then there's the DVD factor. Just as The Lord Of The Rings was upping the stakes in theatres, so too was its DVD release pattern defining what can (and should) be done on disc for major movies. In particular, the four-disc extended editions seem to have affected the director's thinking as to what he can get away with in his theatrical final cut. Hence the public grumbles from Christopher Lee about the non-appearance of Saruman in this final instalment. While it might have been fair to grant Lee a curtain call, Jackson quite rightly realises that it is Sauron, not Saruman, whose fiery eye encompasses all the narrative strands of the climax. The Return Of The King marks the first time in the series when Jackson's roots as a horror filmmaker creep through. As the orcs catapult severed Gondorian heads beyond the walls of Minas Tirith, flesh-rotted ghosts draw swords alongside Aragorn and giant spider Shelob stalks Frodo through dark, web-shrouded tunnels, the film pushes the boundaries of its 12A certificate. And so it should, because the look and tone must necessarily grow darker as the Hobbits near Mount Doom and Mordor's evil hand grips Middle-earth ever tighter. Character nuances have been crafted over an unprecedented ten hours-plus of cinematic storytelling: from Strider lurking in the shadowy corner to Aragorn rallying the troops; from Merry and Pippin as bumbling fools to stout-hearted, pint-sized warriors. Only Legolas and Gimli seem to have regressed (in screen time at least) to set-piece archer and comedy sidekick respectively. At least Andy Serkis is rewarded for his Gollum voice work with an early flashback that gets his face on screen, as well as warning us that, under the ring's power, Smeagol can be as murderous as Gollum. Jackson has kept the momentum of the series rolling on and on though the traditionally 'difficult' middle part and 'weak' finale, delivering a climax to the story that's neater and more affecting than what Tolkien managed on the printed page. Some viewers might feel that the director sprinkles some cheese on his extended coda, adding at least one false ending too many (even if he does ignore the book's Scouring of The Shire). But those who have walked beside these heroes every step of the way on such a long journey deserve the emotional pay-off as well as the action peaks, and they will be genuinely touched as the final credits roll. Yes, the Ring is dead. Long live King Kong. Verdict - The resounding climax to a landmark in cinema history. But the King has now returned, the story is over and the ships are leaving Middle-earth. Ladies and gentlemen, Elvish has left the building. 5/5 - Alan Morrison, Empire Magazine

Too much CGI, redundancy, clichés and drawn out “looks of love” for my tastes. RELEASED 2003 and directed by Peter Jackson, “The Lord of the Rings: The Return of the King” adapts the third part of JRR Tolkien’s popular fantasy trilogy about adventures on Middle-Earth: Frodo (Elijah Wood), Sam (Sean Astin) and Gollum (Andy Serkis) continue to try to make their way to Mount Doom to destroy the One Ring. Meanwhile Aragorn (Viggo Mortensen), Legolas the Elf (Orlando Bloom), Gimli the Dwarf (John Rhys-Davies), Gandalf the wizard (Ian McKellen), King Theoden (Bernard Hill) and Faramir (David Wenham) join forces to fight Sauron's army at the stone city of Minas Tirith and, later, draw the forces of Modor out as a distraction for Frodo to accomplish his goal. Billy Boyd and Dominic Monaghan are on hand as Hobbits Pippin and Merry. While I’m a casual fantasy/adventure fan and have read numerous books of the genre (e.g. Conan, Tarzan, Gor, etc.), I’ve never read Tokien, likely because I’m not into Hobbits, Elves and Dwarfs. After viewing the three movies, The Lord of the Rings strikes me as a mixture of Robin Hood, Conan and The Wizard of Oz, which all possibly influenced Tolkien’s writing of the Rings trilogy in 1937-1949. So, if you think a meshing of “Conan the Barbarian” (1982) and “Robin Hood: Prince of Thieves” (1991) with “The Wizard of Oz” (1939) sounds good, then you’ll probably like these movies more than me. “The Return of the King” is just more of the same showcased in the first two movies, but even LONGER. Take the Battle of Minas Tirith, for example. It’s basically the same as The Battle at Helms Deep in the previous movie, except with colossal elephant-like creatures and the Army of the Dead. These two battles are similar enough that they could’ve been condensed into one conflict. Speaking of the Army of the Dead, this was an interesting new element, as was the horrifying spider-monster that Frodo & Sam face inside the caves. Like the first two movies, the characters are diverse, the tale is creative, there’s a lot of dark action rounded out by softer scenes and everything LOOKS and SOUNDS magnificent. Unfortunately, as with “The Two Towers,” there’s excessive use of CGI (aka CGI porn). If cartoony CGI is your thang then you’ll likely appreciate this installment more than me. There are other problems: While the characters are inspired, they’re also thin and rather uninteresting, at least for mature people who require more depth to hold their attention. Take Legolas (Bloom), for example; we never get to know him. Or consider Aragorn: Mortensen is perfect as the noble warrior, but in the ENTIRE trilogy he probably only has like two full pages of dialog, maybe three. Also, I found the story generally disengaging. I was never much enthralled by the characters and their pursuits, although devotees of Tolkien might be. Then there are WAY too many “looks of love” between characters, particularly Frodo and Sam (I was so happy to see one character get married and have kids, if you catch my drift). There’s also a sense of redundancy, like the aforementioned battles (Helms Deep and Minas Tirith). Or consider the hokey dangling from a cliff by one’s fingers: This was already done with Gandalf at the end of the first part and beginning of the next. Did we really need the entire trilogy to come down to this type of eye-rolling cliché? Another problem is the lack of feminine protagonists. There’s Miranda Otto as Éowyn, Théoden's niece, who becomes infatuated with Aragorn and masquerades as a warrior-ess. Other than that all we have are cameos by Liv Tyler (Arwen), Cate Blanchett (Galadriel) and a Hobbit’s wife. “Mythica: A Quest for Heroes” (2014) cost LESS THAN $100,000 to make, which is a mere fraction of the $94 million it cost to make this blockbuster and the creators knew enough to throw in a couple of prominent babes as heroines in the story. So did “Conan the Barbarian” and “Dungeons & Dragons: Wrath of the Dragon God” (2005). It’s not rocket science. As noted above, the movie’s needlessly overlong and things could’ve been condensed in the trilogy or omitted altogether. When the main storyline ultimately ends at Mount Doom I was thinking there was maybe 12-15 minutes left with half of that time being credits. Nope, there was STILL 30 MINUTES LEFT wherein boring goodbyes and “looks of love” are tacked on. Despite these honest quibbles, “The Return of the King,” and the trilogy in general, was an ultra-ambitious undertaking and is a must for fantasy/adventure aficionados, particularly those who favor Tolkien, Hobbits, Elves, Gnomes and the like. THE MOVIE RUNS 3 hours 21 minutes and was shot in New Zealand. GRADE: C

Downloading Seeding The Lord of the Rings - The Return of the King (H264) Ipod.mp4 from to 0 peers.
of
↘0 b/s / ↗0 b/s
Read our blog post about Streaming Torrents From Your Browser