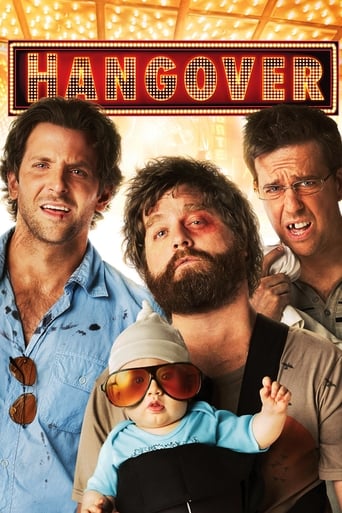 When three friends finally come to after a raucous night of bachelor-party revelry, they find a baby in the closet and a tiger in the bathroom. But they can't seem to locate their best friend, Doug – who's supposed to be tying the knot. Launching a frantic search for Doug, the trio perseveres through a nasty hangover to try to make it to the church on time.

Angelenos Doug Billings and Tracy Garner are about to get married. Two days before the wedding, the four men in the wedding party - Doug, Doug's two best buddies Phil Wenneck and Stu Price, and Tracy's brother Alan Garner - hop into Tracy's father's beloved Mercedes convertible for a 24-hour stag party to Las Vegas. Phil, a married high school teacher, has the same maturity level as his students when he's with his pals. Stu, a dentist, is worried about everything, especially what his controlling girlfriend Melissa thinks. Because she disapproves of traditional male bonding rituals, Stu has to lie to her about the stag, he telling her that they are going on a wine tasting tour in the Napa Valley. Regardless, he intends on eventually marrying her, against the advice and wishes of his friends. And Alan seems to be unaware of what are considered the social graces of the western world. The morning after their arrival in Las Vegas, they awaken in their hotel suite each with the worst ...

Thanks for the up.

Downloading Seeding The Hangover (2009) from to 0 peers.
of
↘0 b/s / ↗0 b/s
Read our blog post about Streaming Torrents From Your Browser