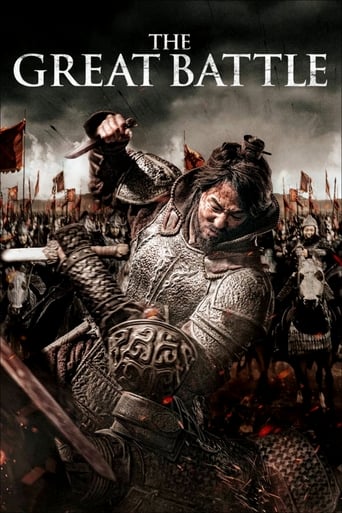 Kingdom of Goguryeo, ancient Korea, 645. The ruthless Emperor Taizong of Tang invades the country and leads his armies towards the capital, achieving one victory after another, but on his way is the stronghold of Ansi, protected by General Yang Man-chu, who will do everything possible to stop the invasion, even if his troops are outnumbered by thousands of enemies.

The one thing that ‘The Great Battle’ is very good at is spectacle. With over half the movie consisting of action scenes, if you love violence as much as a Spartan, Quentin Tarantino, a video-game-playing teenage boy or me, you will be endlessly fascinated. - Jake Watt Read Jake's full article... https://www.maketheswitch.com.au/article/review-the-great-battle-an-awesomely-entertaining-war-epic

Downloading Seeding The Great Battle 2018 720p BRRip x264 MkvCage ws from to 0 peers.
of
↘0 b/s / ↗0 b/s
Read our blog post about Streaming Torrents From Your Browser