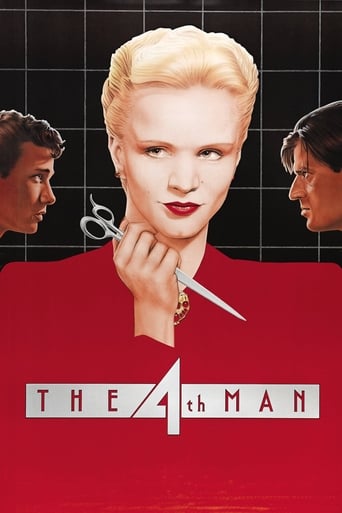 An alcoholic writer begins having visions apparently warning him of impending danger. After he delivers a lecture, he begins an affair with a woman from the audience. The visions intensify, however, and begin to threaten his relationship with the woman, since it may be her the visions are warning against.

The Fourth Man (Dutch: De Vierde Man) is a 1983 horror film by Paul Verhoeven, based on the novel De Vierde Man by Gerard Reve. The film stars Jeroen Krabbé and Renée Soutendijk.

The film has been accused of homophobia. Gerard's homosexual relationship, shown at the beginning of the film, is of an unsupportive, bickering nature with violent overtones. Gerard is portrayed as an alcoholic, a shoplifter, a voyeur and contemptuous of his readers. When he sleeps with the petite Christine, he flattens her breasts with his hands and exclaims "you look like a boy in his glory. so slim, tender!". When Gerard flirts with Herman, he puts his hand on his thigh and says, "I could tell you stories. There's one bigwig bastard, when he throws a do. All the neighbors lock their kids up behind locks so thick. Children of six or seven years old, girls and boys, no difference. Find that fun? Little boys!" He seduces the heterosexual Herman by a surprise fondling of him from behind.

A poster on the train is for Samson and Delilah

Woman on the train holds an apple peel above her child's head in imitation of a halo. Child's shirt says "Daddy's boy".

During lecture, Gerard is asked, "You call yourself an orthodox Catholic. Is that right? How can a man of sense in the scientific world say he is a Catholic today?" Gerard replies, "How can a man of sense say he's not a Catholic. Catholic doesn't equate with stupid. A Catholic must always be aware of the fantastic. Our research and progress are byproducts of fantasy. So the world of science must be Catholic."

Gerard exclaims "Mary through Jesus" while climaxing, because he is using Christine to get to Herman.

As Mary leaves the salon, she picks up Jesus from his father who says, "He's been such a good boy".

“ The Fourth Man has to do with my vision of religion. In my opinion, Christianity is nothing more than one of many interpretations of reality, neither more nor less. Ideally, it would be nice to believe that there is a God somewhere out there, but it looks to me as if the whole Christian religion is a major symptom of schizophrenia in half the world's population: civilizations scrambling to rationalize their chaotic existence. Subsequently, Christianity has a tendency to look like magic or the occult. And I liked that ambiguity, because I wanted my audience to take something home with them. I wanted them to wonder about what religion really is. Remember, that Christianity is a religion grounded in one of the most violent acts of murder, the crucifixion. Otherwise, religion wouldn't have had any kind of impact. With regards to the irony of the violence, much of that probably comes from my childhood experiences during and immediately following the Second World War. In fact, if it hadn't been for the German occupation and then the American occupation, I would have never been a filmmaker. ”

Christine as a witch, black widow, Delilah or devil.

The name of her salon is Sphinx (meaning riddle) which flickers to become Spin (Dutch for spider).

Christine lies on broken glass and cannot feel it because of a numb spot on her back.

While eating breakfast alone with Christine, Gerard says, "This is paradise" to which Christine replies, "For paradise, there needs to be two of you" implying that she would be the snake in the Garden of Eden.

Christine films her victims as part of her black magic

Films husband #1, Johan, while skydiving and herself jokingly cutting the chutes lines.

Films husband #2, Ge, at the safari park and herself clawing like a lion for the camera

Films husband #3, Henk, entering his boat and herself rushing at the camera lens with fishing poles.

Films Gerard and Herman while they are driving.

Plans to film victim #5 while he windsurfs.

(According to the final credits, Ge was her first husband and Johan her second, but they are shown in the order given here.)

Gerard is dreaming the opening scene of the spider trapping a fly and crawling on the crucifix.

While on the train, he sees an ad for the Hotel Bellevue (Good Eye or Woman's Vision). The Room #4 marker turns into an eyeball and oozes down the door.

During the night, Gerard dreams of a cemetery where the woman from the train appears with a key that opens a tomb containing 3 carcasses dripping blood into milk cans and a 4th can waiting empty into which she places red flowers.

Immediately afterwards, Gerard dreams that Christine cuts off his penis with scissors.

While reading Christine's palm, Gerard has a vision of Herman emerging from the ocean with his eyeball dislodged.

At the train station, Gerard sees a coffin with a crumpled ribbon reading "Guido Herman" which he has mistaken for his own name "Gerard". While writing his novel, Gerard re-imagines the scene but this time with the name "Herman". At the end of the movie, Gerard again sees the coffin with the name "Herman". Gerard mistakes Herman's name on a wrinkled letter as Gerard.

In the church, Gerard hallucinates that a crucifix is really Herman in a red Speedo crucified.

While with Herman in the crypt, Gerard sees the urns and has visions of the missing film footage of each of the 3 men's deaths.

Gerard Reve is the name of both the protagonist and the author of the book and screenplay.

Loosely remade as Verhoeven's fourth Hollywood movie, Basic Instinct, of which Verhoeven considers The 4th Man to be the prequel

Downloading Seeding The Fourth Man (eng subs) [1984] dir Paul Verhoeven from to 0 peers.
of
↘0 b/s / ↗0 b/s
Read our blog post about Streaming Torrents From Your Browser