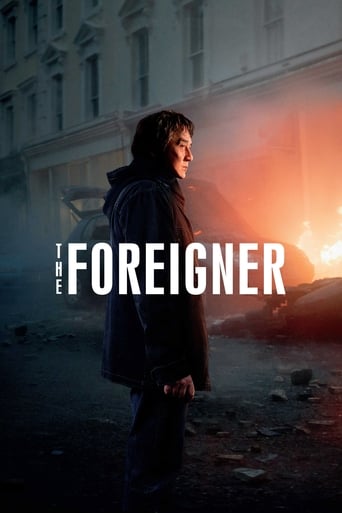 Quan is a humble London businessman whose long-buried past erupts in a revenge-fueled vendetta when the only person left for him to love – his teenage daughter – dies in a senseless act of politically-motivated terrorism. His relentless search to find the terrorists leads to a cat-and-mouse conflict with a British government official whose own past may hold the clues to the identities of the elusive killers.

A humble businessman with a buried past seeks justice when his daughter is killed in an act of terrorism. A cat-and-mouse conflict ensues with a governmentofficial| whose past may hold clues to the killers' identities.

Jackie Chan just keeps fuckin' bringing it doesn't he? The serious tone of _The Foreigner_ fits him well, but the role he plays seems oddly shoehorned in. I understand that the movie is in actual fact based on a novel called _The Chinaman_, which I assume unfolds more or less as the film does. But the Troubles-themed Political Drama makes up most of the runtime in _The Foreigner_, and the Action/Revenge Thriller element seems almost like at some point in pre-production the crew went "Holy shit, did you know we can put Jackie Chan in this? Quickly! Write him a role!". Although I'm sure that it's not the case, that is how it feels, and while the Action/Revenge Thriller element is the best part of the movie, its failure to mesh with the piece at large does bring it all down a bit. Still a worthwhile watch if you're a fan of the Chan. _Final rating:★★½ - Had a lot that appealed to me, didn’t quite work as a whole._

Downloading Seeding The.Foreigner.2017.1080p.BluRay.x265-RARBG from to 0 peers.
of
↘0 b/s / ↗0 b/s
Read our blog post about Streaming Torrents From Your Browser