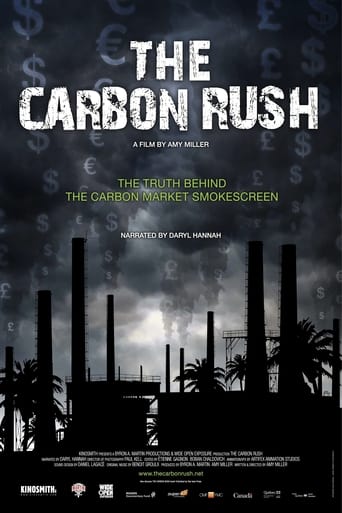 Around the world, multinationals are taking advantage of carbon credits to allow them to burn their waste. Beneath the system’s environment-friendly veneer, entire ecosystems are under siege, human populations are in economic crisis, and greenhouse gases keep spewing into the atmosphere. Three years after making MYTHS FOR PROFIT, activist filmmaker Amy Miller follows up with this ambitious documentary (filmed on four continents) – a bold, highly intelligent work on the dark underbelly of green business. Even while working on a grand scale, she creates intimate portraits of numerous communities, never forgetting that global issues always affect individual lives. An essential appeal to conscience.

Incinerators burning garbage in India. Hundreds of hydroelectric dams in Panama. Biogas extracted from palm oil in Honduras. Eucalyptus forests harvested forcharcoal in Brazil. What do these projects have in common? They are all receiving carbon credits for offsetting pollution created somewhere else. But whatimpact are these offsets having? Are they actually reducing emissions? And how are they affecting the people who live in these countries? THE CARBON RUSH takesus around the world to meet the men and women on the front lines of carbon trading. So far their voices have gone unheard in the cacophony surrounding thismulti-billion carbon industry| nicknamed "green gold" by its beneficiaries. Indigenous rain forest dwellers are losing their way of life. Waste pickers atlandfills can no longer support themselves. Dozens of Campesinos have been assassinated. THE CARBON RUSH travels across four continents and shows the connectionbetween these tragedies and the United Nations' Clean ... Downloading Seeding The.Carbon.Rush.2012.WEBRip.XviD.MP3-XVID from to 0 peers.
of
↘0 b/s / ↗0 b/s
Read our blog post about Streaming Torrents From Your Browser