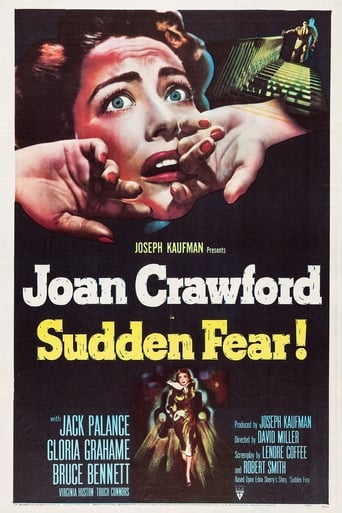 Actor Lester Blaine has all but landed the lead in Myra Hudson's new play when Myra vetoes him because, to her, he doesn't look like a "romantic leading man." On a train from New York to San Francisco, Blaine sets out to prove Myra wrong...by romancing her. Is he sincere, or does he have a dark ulterior motive?

You know what happened to Nietzsche? Sudden Fear is directed by David Miller and adapted to screenplay by Lenore J. Coffee and Robert Smith from the novel written by Edna Sherry. It stars Joan Crawford, Jack Palance and Gloria Grahame. Music is by Elmer Bernstein and cinematography by Charles Lang Jr. "Miss Hudson, in your own native city of San Francisco, there's an art gallery in the Legion of Honor in which there's an oil painting of Casanova. It's quite obvious that you have never seen this painting. For your information, Miss Hudson, this is what Casanova looked like. He had big ears, a scar over one eye, a broken nose, and a wart on his chin, right here. I suggest, Miss Hudson, that when you return to San Francisco, you visit this gallery and see this painting!" The above is the response Lester Blaine (Palance) gives to Broadway playwright Myra Hudson (Crawford) who has just rejected him for the lead role in her latest play on account of his looks. Later that day the pair meet up on a train heading for Frisco and Myra is swept off of her feet. They court and marry, but once finances come into play and Irene Neves (Grahame) arrives on the scene, something far more sinister begins to rear its head It takes a while to get going, but once Sudden Fear hits its stride it's a suspenseful noirish delight. Filmed on locations in San Francisco and with Lang Junior bringing the chiaroscuro and Miller dabbling in deftly placed shadows and tracking cameras, there's a visuality that's vital to the edgy atmosphere of the story. It's pretty obvious quite early on what is happening in the plotting but this never affects the suspense, Miller builds it slowly and then unleashes the chills at the midpoint, garnering top performances from the three principal players in the process. It's ready made material for Crawford, where she gets to run through her repertoire of female emotions, while Palance enjoys playing the villain and Grahame slinks in to view in the way that only she can. Some trimming of the running time wouldn't have gone amiss, and some of Myra's stamina powers in the final quarter stretch the faith a touch, but all told it's a very good "woman in peril" noir that is crowned by a terrifically exciting ending. 7.5/10