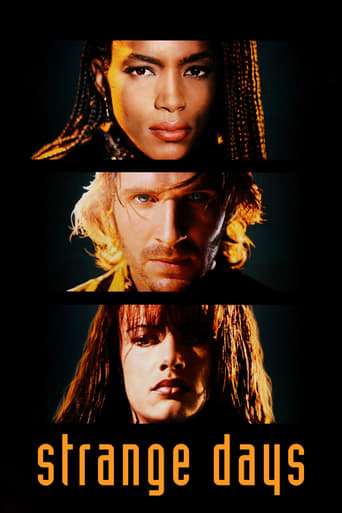 Set in the year 1999 during the last days of the old millennium, the movie tells the story of Lenny Nero, an ex-cop who now deals with data-discs containing recorded memories and emotions. One day he receives a disc which contains the memories of a murderer killing a prostitute. Lenny investigates and is pulled deeper and deeper in a whirl of blackmail, murder and rape. Will he survive and solve the case?

In 1999, Los Angeles is racial war zone with the army and LSPD and SWAT officers fighting Afro-American people. The former cop Lenny Nero is a dealer of illegal recording in CDs that gives the memories and sensations of the recorder to the user. He buys the recordings from the supplier Tick; he misses his former mistress Faith, who was a hooker and now is a singer; his best friend is the private eye Max Peltier and the limousine driver Lornette 'Mace' Mason, who has unrequited love for him. Two days before the turn of the century, the black rapper Jeriko One is murdered. The hooker Iris seeks Lenny out but there is an incident and they do not talk to each other. However she drops a recording into Lenny's car while he unsuccessfully tries to meet Faith at a night-club. However her boyfriend Philo Gant does not let them talk. When Lenny learns that Iris was sadistically raped and killed, he gets involved in a sick scheme and discovers dirty hidden secrets.

The answer being, of course, yes I am impressed.What a thoroughly enjoyable film Strange Days is. Fast-moving and occasionally violent, it's not high art but then neither is it dumbed-down fodder and it has much to commend it. The central plot revolves around an ex-cop (Fiennes, doing a - to my ears anyway - convincing American accent) peddling FBI technology on the black market. The SQUID technology (Super conducting QUantum Interface Device) electronically absorbs information from the central cortex and allows users to experience the thrill of another's sensations - be it murder, sex, robbery, etc. Of course, this central idea, while fascinating, does derive pretty much directly from a Twilight Zone episode. Were this a "classic" Zone episode from the b/w era, then people would have picked it up straight away and the game would be over. As it is, the inspiration comes from one of the colour Twilight Zone episodes which had even less viewers than Strange Days and so the movie can rest assured it is safe in obscurity. (Give up? Okay, it was episode 23, season three, 1989, "The Mind of Simon Foster". I'm an anorak, I know these things).But whether such were intentional is pretty much irrelevant as the magpie technique of this film takes from many texts and builds something greater than the parts. One of the two greatest science fiction films of the 90s - the other being the excellent "Twelve Monkeys" - both have built-in sell-by dates by fixing their time period in a very near locale. Hence while the supposed date of Monkeys is long past at 98, this film now becomes a historical document as of New Year's Eve 1999. But then does it follow that we will stop watching 2001 in 2002? Hopefully not, and Strange Days is one that too deserves to be revisited in years to come.The reason why I commend it most is its rewarding political stance. The development that gets adhered onto the "Squid" plot directly references the beating of Rodney King. Such contemporary referencing may again date it as quickly as the '99 setting, but then we also have Angela Bassett as a very empowered, yet caring black woman. Note how she and Lenny have exchanged traditional gender roles in this film, yet this feels not like some "macho woman" schtick but genuine characterisation. Lenny is a likeable, wisetalking street peddler who spends the film as a human punchbag. Gone is the cliched jaw-breaking action man role for him, instead his only retort to violence is "I'll give you my Rolex". This sense of, if you like, PC-ness, can also be evidenced with the lesbian couple kissing as the year 2000 breaks, or the (one scene only, admittedly) appearance of a disabled man as a central character.However, the boundary-pushing elements of this movie are tainted by the appearance of Juliet Lewis in the film. A capable actress, her only role appears to be as a receptacle for various men's sexual needs or to gratuitously expose her breasts on multiple occasions. This is a great shame, and a pity that a film which has such high intentions in almost every other area should fall back on unfortunate portrayal.The dialogue is pitched just about right without being particularly clever, though occasionally it stalls. "You're like a goddamn cruise missile, targetted on making it", Fiennes tells Faith (Lewis) at one point, managing to keep a straight face. Later, Bassett must endure having to say "These are used emotions. It's time to trade them in" and not use her gun on the scriptwriter. When the credits do roll, it's perhaps no surprise that James Cameron was the co-writer, as its slight perfunctory, by-the-numbers stance often reminds one of the machinations of "Titanic". Tom Sizemore as Max is every inch the one-dimensional Cameron "character", while plot twists sometimes feel heavily engineered. Maybe Jay Cocks is responsible for the script's more "human" feel, with particular note going to the moral debate of whether or not to expose the LAPD's murder of an influential black rapper. The two leads debate (internally, as well as verbally, a first for a Cameron movie) the implications and the possible consequences of such an action. Despite its flirtation with the mainstream, Strange Days is a film that dares to pervert the traditional course of Hollywood into a future that is worth seeing. Perhaps predictably, it made little impact at the box office.

"Strange Days" is a unique science fiction and mystery film. Set in Los Angeles during the last two or so days prior to the new millennium, the cast is helmed by Ralph Fiennes as the charming, brave, but shady Lenny Nero. Lenny is a former LAPD officer who loses his job for mostly unknown reasons. He then becomes a black market hustler who sells people's recorded memories for profit. For the most part, these recorded memories are either violent or sexual in nature.Angela Bassett does a great job complementing Fiennes' "Lenny" character in her role as Macy, Lenny's close friend who makes a more legitimate living as a limo driver and security specialist. Lenny and Macy soon become embroiled in a murder mystery involving corruption within both the LAPD and the music industry. This seemingly ever-deepening mystery also involves Lenny's other close friend, Tom Sizemore's character "Max". Max is a private eye who, despite seeming to be very well-intentioned, is just as shady as Lenny. Juliette Lewis rounds out the cast as "Faith", Lenny's troubled and devious rock singer ex-girlfriend. Besides the awesome and well-acted performances, what made this movie stand out to me is just how on the nose some of the background references are in it. References to an economic collapse, increasing gas prices, and strained relations between the police and minorities make this a very odd foreshadowing of the actual real-life future. In conclusion, great acting, a very deep and interesting storyline, and great cultural references make this a very highly recommended film.

Probably one of the best big-budget sci-fi films to never reach a big audience. Written and produced by James Cameron and expertly directed by Kathryn Bigelow, this film is more noir than actual sci-fi - although the sci-fi elements are important. With a great cast and an amazing atmosphere throughout, this is one not to miss for fans of thrillers, film noir, sci-fi and especially the subgenre knwon as cyberbunk. 8 stars out of 10.In case you're interested in more underrated masterpieces, here's a list with some of my favorites:imdb.com/list/ls070242495