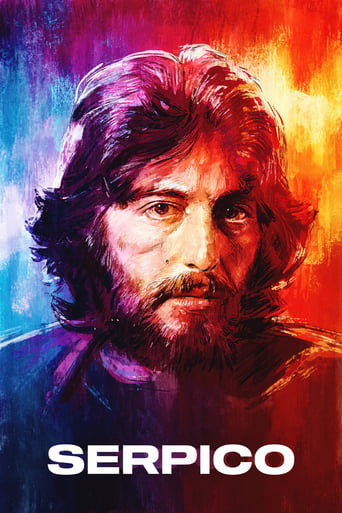 Frank Serpico is an idealistic New York City cop who refuses to take bribes, unlike the rest of the force. His actions get Frank shunned by the other officers, and often placed in dangerous situations by his partners. When his superiors ignore Frank's accusations of corruption, he decides to go public with the allegations. Although this causes the Knapp Commission to investigate his claims, Frank has also placed a target on himself.

Serpico is a cop in the 1960s-early 1970s. Unlike all his colleagues, he refuses a share of the money that the cops routinely extort from local criminals. Nobody wants to work with Serpico, and he's in constant danger of being placed in life threatening positions by his "partners". Nothing seems to get done even when he goes to the highest of authorities. Despite the dangers he finds himself in, he still refuses to 'go with the flow', in the hope that one day, the truth will be known.

An honest cop. Who would believe that? Serpico is directed by Sidney Lumet and adapted to screenplay by Waldo Salt and Norman Wexler from Peter Maas’ biography of NYPD officer Frank Serpico who stood up to expose rife corruption in the force. It stars Al Pacino, John Randolph, Jack Kehoe, Biff McGuire, Bernard Barrow, Nathan George and Tony Roberts. Music is by Mikis Theodorakis and Giacomo Puccini and cinematography by Arthur J. Ornitz.. Great story telling meets a first class acting performance in Lumet’s searing movie. Frank Serpico (Pacino), a legend to us mere mortals out on the street, but the most hated man on the NYPD, so much so he almost paid for his sense of what’s right and wrong with his life. Picture follows Frank through his integration on the force and onto the build up of corruption he comes across. All the time we are also getting an insight into the man himself, his life and loves outside of work, with Lumet and Pacino making sure Frank is not painted as a saintly perfectionist, there is no halo above his head, he has flaws like everybody else. New York is expertly painted as a raw and grubby place, the hustle and bustle a nuisance, and the seamy underside where crims and dirty coppers dwell makes you feel like taking a shower. It proves to be a riveting character study and a thought provoking expose at the same time, while ultimately it proves to be a touching experience come the culmination of the drama. Excellent. 9/10

Downloading Seeding Serpico (1973) BRRip Oldies Dual-Audio from to 0 peers.
of
↘0 b/s / ↗0 b/s
Read our blog post about Streaming Torrents From Your Browser