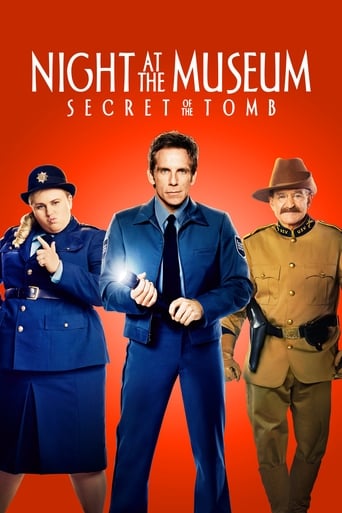 When the magic powers of The Tablet of Ahkmenrah begin to die out, Larry Daley spans the globe, uniting favorite and new characters while embarking on an epic quest to save the magic before it is gone forever.

At the Museum of Natural History, there's a new exhibit being unveiled. Larry Daley, who manages the night exhibit where the exhibits come to life because of the Tablet of Ahkmenrah, is in charge of the presentation. But when the exhibits go awry, Larry finds himself in trouble. He learns the Tablet is corroding so he does some research and learns that Cecil, the former museum guard, was at the site when the Tablet was discovered. He tells Larry they were warned if they remove it could mean the end. Larry realizes it means the end of the magic. He talks to Ahkmenrah who says that he doesn't know anything. Only his father the Pharaoh knows the Tablet's secrets. He learns that the Pharaoh was sent to the London museum. So he convinces Dr. McPhee, the museum curator, to help send him to London. He takes Ahkmenrah with him but some of the others tag along, like Teddy Roosevelt, Attila, Octavius, and Jedediah. So the final movie in the trilogy. That's what I'm hoping for. Because when the first movie came I thought it was a nice idea and then its sequel was so bad without any further innovative ideas to add up. I was not expecting the third movie, but it made its way and I give it a try only to get disappointed. Ben Stiller is a fine actor and a great director, this trilogy was just a passing cloud in his career, other I would have blamed him for accepting the offer. As we know its a multi star movie, in that I am very happy to see Robin Williams one final time. What a great actor, lucky we had him in our time. The funny thing is I am confused for Rebel Wilson as Melissa McCarthy, but soon after realised. The rest of the cast, Wilson, Coogan, Kingsley and other were what to say, their existence were in individual narrow thin lane in a weak story. Badly needed a fresh plot in the well known concept from the last two movies, and it did not give us. Hope the reboot would be very creative in the each three. May be it should set in the Hollywood studios like Marvel, Disney et cetera. Because, as I am a movie fanatic, love to see some of my favourite characters like Gandalf the gray, Joker et cetera, as well as beasts like Godzilla, King Kong et cetera come alive at night. It would be so awesome. Anyway, this movie was just okay for a certain reason. Don't expect high, because it won't serve you. 5/10

Night at the Museum: The Closure. Part 3 - and expected last instalment - of the poplar NATM series pitches Larry Daley (Ben Stiller) on a mission to save the magic stone that brings his exhibit friends to life. So off he goes to London where new characters and new exhibit creatures join the frothy frolics. In truth it's all very predictable and plays exactly like the money maker it is, but as with the other two films prior to this one, it has bundles of joy for the kiddies, whilst inserting some dark patches and edgy gags for the benefit of the adults. There's fun cameos, one of which is a joyous belter, and all the returning cast members are joined by an ebullient Dan Stevens as Sir Lancelot. For a series closer it could have disgraced itself, but with some neat injection of ideas and decent story telling, it winds up as above average. The caveat, though, is that at the same time it convinces that the franchise has very much run its course. 6/10

This film served as great entertainment with its colorful cast and numerous plot twists. Levy used all characters from its previous version of this movie and obviously comfortable with Levy's directing style and the film's dramatic tone. It was brilliant! i have almost lost all my adventures and interests of my life. Thanks to this wonderful film. One thing i didn't like was an expression of the caretaker's son, that was dreadful. I think Levy shouldn't have chosen that actor. However, rest of the content and actors were okay, just like usual.

in my mind, this movie is awesome. This movie contains magic about of the tomb. It can revive all of the exhibits. And they can walk, talk and some of them love each other. This movie was the most interesting movie i've ever watched. I decided to go to the museum nearly. There are many special scenes and funny moves. It isn't possible in real life but it is really enjoyed. If you didn't watch this movie I advice you to watch this film. Highly recommended.

I have just seen this movie and to me i really like it and to me i like this movie i would watch but not the kind of movie i would love. So i think the groups of people who would love or maybe just like could be explorers, full of action people,people that like lots funny movies,people that are fine with lots of different emotions, fiction people and people that like movies. But i would not recommend this to you if you don't like non fiction movies, or if you don't like the characters, or any of the things i said about people who would watch this but the opposite of what i said about it.When the exhibits at New York's Natural History Museum start behaving strangely, Larry Daley (Ben Stiller) -- now the director of nighttime operations -- must find out the cause. He learns that the Tablet, which magically brings Teddy Roosevelt (Robin Williams), Jedediah (Owen Wilson) and the other exhibits to life at night, has started to decay. Larry, along with his son and museum friends, must travel to London's British Museum to learn how to prevent the Tablet's magic from disappearing. I think the whole cast did a good job and really worked hard to make this movie.