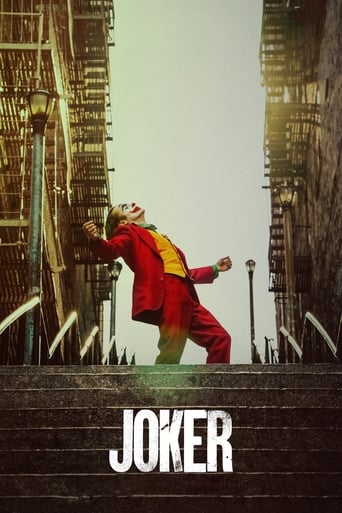 During the 1980s, a failed stand-up comedian is driven insane and turns to a life of crime and chaos in Gotham City while becoming an infamous psychopathic crime figure.

In Gotham City| mentally-troubled comedian Arthur Fleck is disregarded and mistreated by society. He then embarks on a downward spiral of revolution and bloodycrime. This path brings him face-to-face with his alter-ego: "The Joker". The Joker is similar to the DC Joker character but is not a criminal genius. The movie was a great depiction of how a person who has been mistreated, lied to, and ignored, totally lacking access to human compassion, can snap. The acting is top notch, and it puts a spotlight on the importance of mental health in modern times.

Okay, this film has already been so widely debated that I’m not sure what I can really add to the conversation. So, I’ll just give my thoughts. “Joker” is a fairly basic character study of Arthur Fleck, a mentally ill man who feels increasingly marginalized by an uncaring and brutal society in Gotham City. To start, the characters, except for Arthur himself, are pretty flat. They seem to have little purpose other than to further Arthur’s story. This includes Thomas Wayne, who in other media is portrayed as a man of many dimensions, wealthy but caring, and instilling these values in his son Bruce. Here, he is portrayed as much more uncaring and elitist. Which gives much less of an impact in the inevitable alley scene we see in everything remotely related to Batman. More on this in a minute. It’s important to the point. Arthur suffers a condition that makes him burst into laughter at inappropriate times. He also has other unspecified mental illnesses. We’re never given the specifics. This is actually a little troubling because of the general depiction of mental illness. It almost seems like they are saying that if someone is mentally ill then they are a ticking time bomb and it’s only a matter of time before they go off. This is not a good look. After a series of events, Arthur begins spiraling downward, but at the same time realizes how much influence he can have over other people, an aspect of the Joker that isn’t often explored. And this is where the characters other than Arthur being rather flat comes into play. There’s more than one indication that we are actually witnessing these events through Arthur’s eyes. And this creates a brilliant depiction of a narcissistic personality. The only character that gets fully fleshed out is Arthur himself, but he can’t or won’t connect with other people to see their depth. As such, we get to see narcissism from the inside, no connection to others and in fact seeing them as pawns in his own schemes. It’s subtle and definitely not in your face, but if you look carefully, the hints are there. Those who fear that "Joker" would glorify incel violence or otherwise can rest a little easier, but as I mentioned, the film isn't without its troubling portrayals. It does vilify the mentally ill, which creates a whole host of other issues. The movie swings wildly between "excellent" and just "okay," and sometimes even "meh." As such, it gets a recommendation, but only a mild one.

*A Masterpiece*. The movie shows the escalating events that made Arthur become the Joker. Initially an inoffensive poor and sick man, Arthur suffered a tide of unfortunate events that pushed him closer and closer to the edge. Ignored and despised by everyone, sick and alone in the world, and neglected by the State, Arthur becomes progressively more violent until he breaks. Much more than one more Super-hero movie, *Joker* uses well-known characters to promote the reflection on the "ignored" ones. At least, ignored until they become a Joker.

***Not fun, but absorbing, artistic and tragic*** A mentally troubled middle-aged clown (Joaquin Phoenix) who lives with his mother (Frances Conroy) in Gotham City goes from not good to worse when he finally realizes his true identity. Robert DeNiro plays a talk show host and Zazie Beetz the friendly girl down the hall. Brett Cullen is on hand as Thomas Wayne, Bruce’s rich father. "Joker" (2019) is an arty, slow-burn character study of the popular DC Comics’ villain, but it’s more of a psychological crime drama/thriller and tragedy than a superhero flick (or, in this case, supervillain). The movie’s captivating from the get-go and practically everything works for a broodingly superb cinematic experience. There are several amusing bits, but this ain’t a fun flick. It’s heavy and tragic. But what’s the message? Simply that this is how a quirky man who wanted to make people laugh became The Joker. He’s a little reminiscent of the clown in Steve Gerber’s “Night of the Laughing Dead” in Man-Thing #5 (1974). The movie runs 2 hours, 2 minutes, and was shot in New York City (Bronx, Harlem, Manhattan) and nearby New Jersey (Jersey City & Newark). GRADE: A-/A

_Joker_ is a tour-de-force of a movie, not quite like anything I've seen, maybe since Taxi Driver. At its core it's a movie about the breaking point of a broken man, wrapped under the banner of a comic book movie that, take out the Waynes, works on its own. Joaquin Phoenix truly gives a transformative performance (not unlike Heath Ledger) and will say is deserving of an Academy Award. The supporting cast all did well, though, and it is a small role, Zazie Beetz was great and De Niro had his moments, particularly at the end. Got to hand it to Todd Phillips, between this and the good, albeit flawed, War Dogs, has proven to be more than those Hangover movies. No, this isn't a feel-good movie and while it does sit at the top of my 2019 list, not entirely sure when I'd revisit. **4.75/5**

saw it 3 times already in cinema, a masterpiece.

Did you get a medal?

How old are you? Five. Let people be.

boludo whats are you doing here ....

Yes, he deserves three medals and special award for having good taste You on the other hand deserve to be punished for being a d***

ikr? it's like, take your own advice you stupid. you're doing the same thing xd

Attacking agresive guy is not 'the same thing' as attacking a guy that is 'too enthusiastic'...

This kind of comment is why The Joker type of people exist and will burn the world.

Unfortunately at this point in time, I have to put my hand up and say Im Australian. My Apologies for this guys knuckle headed opinion, most of us are reasonable down here!

What a great movie. First R-rated movie to cross 1 Billion AND didn't even release in China

often art reflects reality... and in this case, there is a message in the madness that many fail to see in this kind of movie. all is connected.  Look how many (especially in america) are homeless, addicted, mentally ill and untreated... left behind.  symptomatic of a sick society. like when an individual person is sick.. they have 'symptoms' ... same goes for society

More like an important message on how mental illness effects human beings.

Yes, but the bigger question is WHY are there more and more increasingly mentally ill, addicted, homeless, left behind people? the answer is that it is all interconnected. the corruption is systemic and we continue to try and treat the symptoms without getting to the roots of the problems.. just as treating symptoms for a disease does not always cure the dis-ease in a person, same goes for an entire society

The disease is capitalism

yes and no. isms are the problem. empathy is the solution. consciousness and the raising of it, will save humanity and raise the bar for all of humanity. whether it's capitalism or socialism, if it's run unconsciously by the same kind of people in separation,it fails. we don't even have capitalism now, we have cartelism. big pharma, big agriculture, big tech, big banks etc. all cartel industries = failures in the big picture.

Disney makes plenty of happy movies. it's nice to watch something that isn't always rainbows and unicorns.

Rainbows, unicorns and the cinematic equivalent of farts. We can't forget the ubiquitous presence of cinematic farts now. It only accounts for 99.999% of the films we pay to watch with our hard or earned money or waste our time and effort to pirate after all.

how is the quality on this rip?

exactly what im wondering as this is sooner than I expected

Seen this 14 times in the cinema,gonna watch it three times tonight and four times tomorrow,thatnks for the upload.

Are you okay, bud?

Why only four times tomorrow?

Why are people in such a hurry to call this a masterpiece? It's a really good movie, but masterpiece? Only time will tell.

Anyone notice problems with the audio like every 5 mins or so goes out and comes back for a 1 second?  Is it the release cause I played it in all players VLC, klite etc... and it still does it, wondering if anyone else noticed it, thanks

IMDb says Joker's runtime is 2h 2m, while this release is 1h 55m -- so it appears 7 minutes has been cut? Can anyone confirm?

Its only the last 7.

So basically the ending is missing?

So basically the ending is missing?

I dl'ed a different release with same runtime, their nfo states complete movie but credits are cut..

Cool, I was hoping that was the case.

ahhhhhh the korsub i've been waiting for    thanks!

We have the power to realistically swap faces but not strip korean subtitles.. AI scientists have their priorities wrong

People have worked on logo removal (which would be a similar but slightly simpler class of problem)in the past, but the media cartels have pointed a stack of lawyers at the individuals working on solutions. And even though they have broken no laws, the legal action can waste a large percentage of peoples time.

What a colossal waist of time-only joker for me is one in a Dark knight. This was so boooooring ,it takes forever to get to fun part and then movie ends. Joaquin did the role good as mad joker but script sucks donkey balls.

let's see why is this movie hyping people out...

Almost had a heart attack seeing this listed on rarbg.  But I really want to wait for the BluRay.  I loved this film so much. It might be the first 4K BluRay I actually buy in years.