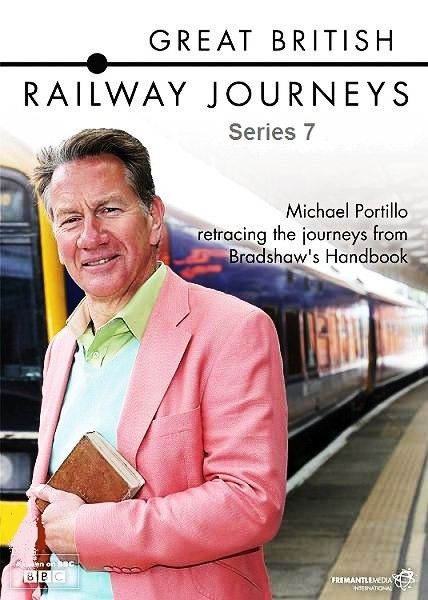 Michael Portillo embarks on another journey around the country to discover how the railways have affected people and communities, and the legacy they left.

The first leg of a journey through north-west England begins in Carlisle, where investigates the Victorian appetite for the custard cream, before braving a perilous descent into the only operational slate mine in England and discovering a miniature railway.

Michael continues his journey through the Lake District, where he discovers a magical world of talking rabbits, ducks, hedgehogs and mice, who have entertained children for more than 100 years. At the village home of author and illustrator Beatrix Potter, he learns about her legacy and her fears about the railways. Michael presses on to Brantwood, home of the Victorian art critic, John Ruskin, and finishes with a brief encounter at Carnforth.

Michael Portillo reads the riot act in Preston, and discovers four mill workers were shot dead at a protest in 1842. In Darwen, he traces developments in interior design from wallpaper to paint, before exploring the Victorian industrial landscape of Salford in the paintings on LS Lowry. He finishes his leg of the journey on Kersal Moor, where he discovers the poetry of Edwin Waugh and twists his tongue around the Lancashire dialect.

Michael travels from St Helens to Knutsford, finding out about modern glass-making and how techniques invented in the Victorian era to construct buildings such as the Crystal Palace have evolved and are powering a new architectural revolution.

On the last leg of his journey through north-west England, Michael Portillo makes a clean sweep in Ashley, Cheshire, where in Victorian times the new middle classes set up home in suburban villas with multiple chimneys swept by children. In Macclesfield, he finds the end of the Silk Route and tries his hand at screen printing. Then after stoking the fire on the steam-powered Churnet Valley Railway, the former politician alights at Froghall, Staffordshire, heading for Alton Towers to trace the 19th-century origins of the theme park.

Michael Portillo embarks on a new railway journey along the south coast of England. Beginning in the port of Dover, he takes a plunge into the English Channel, inspired by the example set by a brave 19th-century sea captain. A miniature steam train one third the size of a conventional locomotive conveys him from Romney Marsh to Dungeness, and in Eastbourne, he learns how the 7th Duke of Devonshire managed to market the town's attractions to the refined upper-crust of Victorian London. The first leg of his trip concludes in eccentric style at the Glyndebourne opera festival on the South Downs.

Michael travels from Newhaven to Worthing, examining the nation's hidden defences, and taking in two magnificent engineering achievements - the Ouse Valley Viaduct and the Clayton Tunnel. High on top of a favourite Victorian beauty spot he learns how trains carried hordes of day-trippers to fly kites, and finds a novel way to pick tomatoes in Worthing.

Michael Portillo arrives in Littlehampton, where he discovers how Victorian engineers defended the town's residents from cholera. He stops off at Gosport and experiences the lethal firepower unleashed on the French during in an arms race. In the New Forest, the presenter visits Florence Nightingale's family home, before finishing at Beaulieu, where he seizes the opportunity to drive the first motor car.

Michael begins his latest journey in the sailing town of Lymington, where he makes a life-saving discovery. The route takes him through the Dorchester countryside, where he discovers how the introduction of the railway inspired Thomas Hardy. He tries his hand at carpet-making in Axminster and concludes his journey in Exmouth, where he learns about the work of forgotten Victorian landscape artist Francis Danby.

In Plymouth, Michael Portillo finds out about the Royal Navy's fighting spirit and mixes his own blend of `ruin'. Then, crossing into Cornwall, he learns about the last bridge to be built by renowned engineer Isambard Kingdom Brunel. By Tre, Pol and Pen, the ex-politician comes to know Cornishmen and how to prepare the perfect pasty. This leg of his journey ends in a small village, which in Victorian times became a hub of global communications.

Michael Portillo sets out from Birmingham on the first leg of a trip to Dartmoor, and a visit to the city's town hall reveals a magnificent organ and the location for a celebrated music festival. Travelling south to Kidderminster, he works in a Royal Mail sorting office and discovers more about great postal innovator Rowland Hill, before he ending his journey in Worcester, where he learns about the origins of the British Medical Association.

Michael travels from Redditch to Gloucester, beginning with a look back to Victorian times at a needle manufactory. He also learns how to make Gloucester cheese and joins the Gloucester Choral Society in a rendition of Jerusalem.

Michael journeys from Stroud to Bath, investigating the Victorian origins of snooker, before ploughing a crooked furrow at the Royal Agricultural College in Cirencester. At his final destination in Bath, he takes tea with the ladies, and also discovers a scandalous novel written by an eccentric recluse, who was once the wealthiest man in England.

Michael Portillo travels from Bristol to Glastonbury, entering the foul-smelling world of a Victorian tannery and hearing how a 19th-century entrepreneur made his fortune thanks to mountains of bird droppings, using his wealth to build churches and one of the most luxurious country houses in Britain. When he reaches his destination, Michael heads for the mystical Glastonbury Abbey, where Victorian tourists flocked to hear tales of King Arthur and the Holy Grail.

Referring to his trusty Bradshaw's Guidebook, Michael Portillo stands trial at the Bloody Assizes in Taunton, Somerset, and feels the full force of the law. He also gets to grips with a miracle of Victorian engineering on the Somerset Levels at Westonzoyland, and on Dartmoor embarks on a mid-19th century treasure hunt still popular today.

Michael Portillo sets out from Ashord in Kent on the first leg of a trip to Henley-on-Thames, Oxfordshire, lending a hand at a state-of-the-art train maintenance plant that is home to High Speed 1 rolling stock. A visit to the home of a historic make-up brand reveals the foundations of the Victorian cosmetics industry, before he ends his journey at Knole House in Sevenoaks at Knole House, seat of the Sackville-West family.

Michael Portillo travels from East Grinstead to Guildford, with his trip including a visit to Leith Hill Place to explore the compositions of Ralph Vaughan Williams. He also dons a boiler suit and takes to the footplate of a locomotive on the Bluebell Railway, Britain's first passenger-carrying heritage line, and witnesses the power of dynamite first hand.

Woking to Walton on Thames

Michael travels from Woking to Walton-on-Thames, uncovering the story of Britain's first purpose-built crematorium and visiting Brooklands, the birthplace of motor racing, along the way. As his journey draws to a close, he goes camping and finds out about the unlikely origins of a leisure pursuit that is going strong today.

Michael Portillo starts his latest tour as Hampton Court Palace, where he is treated to a private tour of the Great Vine - the world's longest grapevine - before moving on to stately Claremont House, where tragic circumstances led directly to the birth of the Victorian era. He then moves up the line to Wimbledon and the site of a historic duelling event before ending his journey in Teddington, where he hears the story of a reformer whose work revolutionised the care for those with living disabilities.

20)  Egham to Henley on Thames

Michael begins the final leg in Egham, Surrey, where a historic steam fair offers the original `white-knuckle' ride. Across town lies the Royal Holloway College, now part of the University of London, where the ex-politician discovers the institution's philanthropic roots. Moving into Berkshire, Portillo drops in at a factory manufacturing a famous sleep-inducing beverage with historic roots. Michael's journey ends at Henley-on-Thames in Oxfordshire, where he learns that rowing in an eight is a challenging business.

Downloading Seeding Great.British.Railway.Journeys.Series.7.10of20.Plymouth.to.Porthcurno.720p.HDTV.x264.AAC.MVGroup.org.mp4 from to 0 peers.
of
↘0 b/s / ↗0 b/s
Read our blog post about Streaming Torrents From Your Browser