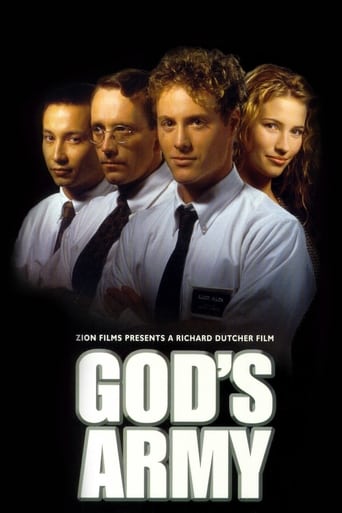 Life as a Mormon missionary isn't what 19-year-old Brandon Allen expected: so many rules and so few successes. Los Angeles is as unrepentant as Sodom and Gomorrah. He's forced to share a small apartment with five young prank-loving missionaries and, to top it off, his first companion, 29-year-old Marcus Dalton, proves to be a harsh mentor. After only one day as a missionary, Allen is ready to hang up his necktie and go home. Allen becomes a part of the drama occurring under the everyday surface of missionary life. After only a few intense days, Allen finds faith he didn't know he had, and courage he didn't know he lacked. He learns that the time has come to put away childish things, and to become more than just a man--to become a man of God.

Downloading Seeding Gods.Army.2000.DVDRip.AC3.XviD-jAh from to 0 peers.
of
↘0 b/s / ↗0 b/s
Read our blog post about Streaming Torrents From Your Browser