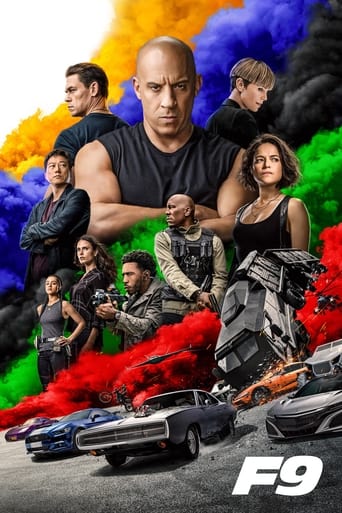 Dominic Toretto and his crew battle the most skilled assassin and high-performance driver they've ever encountered: his forsaken brother.

Dom and the crew must take on an international terrorist who turns out to be Dom and Mia's estranged brother.

After being delayed from a summer 2020 release by the Pandemic; Universal has released the latest film in the Fast and The Furious franchise to fans eager for some adrenaline-fueled summer action. “F9 The Fast Saga” has done well in the few countries it has already been released, and has raced to a nearly $300 million total which the industry hopes is a signal that people are ready to return to cinemas in numbers again and that the film will take off when it opens in the U.S. and other markets. The film opens with a flashback to the 1980s where young Dominic and his brother experience an event that changes their lives and drives a wedge between them. Moving forward to the present day, Dom (Vin Diesel) and Letty (Michelle Rodriguez), are living in seclusion with Dom’s son. When the crew shows up unexpectedly with a mission from Mr. Nobody (Kurt Russell); who has gone missing, the crew venture out to retrieve a missing device which in turn puts them directly in the path with nefarious individuals and a ghost from Dom’s past. As anyone who has watched any films in the series knows; the plots are often thin and a bit absurd as they serve simply as a device for the cast to assemble and chase a McGuffin to save the day. In doing so; the audience knows there will be an abundance of fists, bullets, cars, crashes, and outrageous stunts along the way. While reality and credibility are not words associated with the franchise, the cast eagerly plays along with the absurdity, action, and mayhem and gives fans what they want. While the middle portion dragged while the audience was given more of the setup and introduced to cast members old and new; the action sequences are the over-the-top show stoppers which have become a staple of the franchise. Director Justin Lin knows this and his return to the franchise does not attempt to invoke any new wrinkles and gives fans what they expect. The large ensemble works well with one another and John Cena is a very interesting addition to the cast. Audiences will want to make sure to stay seated for a bonus scene that sets up the next film or spin-off very well and opens up some very interesting possibilities. In the end “F9 The Fast Saga” gives audiences a dose of high-octane adrenaline and a return to no-brainer over the top action when it is needed the most. Check your brain at the door, strap in, and enjoy the ride. 3.5/5

This delay was worth waiting for... First of, it was really cool how they did the flashback; looked like it was filmed in a retro camera, which made it look like it was filmed in the 1989/90s!. Clearly a nod to the first Fast & Furious film. I mean, I was confused at first by what the flashback was telling me, but halfway through the film, it started to all make sense! I give it 5 stars, for basically going overboard with the rocket launcher mounted on a car, the editing for the flashbacks, bringing back two of the characters from Tokyo Drift, combining cheesy humor with outstanding action, the redemption, the post credit scene featuring Jason Statham! And of course the surprising return of Han, and how he survived (the latter definitely had questions that needed answering). Not to mention the storyline itself was brilliantly done.

FULL SPOILER-FREE REVIEW @ https://www.msbreviews.com/movie-reviews/f9-spoiler-free-review "F9 takes its ridiculously absurd action sequences to intolerably nonsensical levels, all while trying to tell an overlong, messy, unimaginative story surrounding one of the most generic cliches. Justin Lin ignores the little balance that the saga still possesses in previous installments, delivering insanely dumb moments throughout entire set pieces, contrary to having a somewhat acceptable action scene with the occasional suspension of disbelief in a specific situation. Daniel Casey and Lin are also unable to create a compelling narrative around Dom's lost brother, ultimately damaging years of character development for Vin Diesel's role. Bringing back Han was as unnecessary as the unconvincing explanation for his return, hurting not only this movie's pacing and extended runtime but also the emotional weight of previous films. The original cast members and the exceptional production value are enough to save this installment from being a massive disaster. If you're able to (really) shut down your brain for over two hours, this might still be an entertaining time at the theater. However, even for fans of the Fast & Furious saga, I doubt this movie will end up as one of your favorites." Rating: D+

I didn't heed everyone's advice and decided I would view this for myself. Yikes!! Definitely not good. Plot holes galore, continuation errors, scene mistakes, factual errors, you name it they exist. Some things just make you scratch your head and say WTF, or smack yourself in the head because you wonder how they could be so stupid when they made this. No, I don't make movies for a living, no I am not a paid critic, I just watch movies for fun and this was not "FUN". If you like action movies with bad acting then this is for you. If you have watched all the other F&F movies and think this is going to be good, then this is for you. If you are looking a way to kill a few hours having numbed yourself then this IS for you. You have been warned.

I watched the film, but it didn't appeal to me as much as the prior films. The change in theme and concept was one of the things that bothered me the most in this film. From street racing and minor crimes, the movies evolved into an idea of saving the planet. Okay, that's wonderful; you can save the world; however, how can someone reach space in his car and survive? Seriously? I don't recall this being fast and furious. The plot was similar to earlier films and revolved around Hobbs and Shaw. The story was not exceptional in any way. And, when it comes to action, it was unrealistic and unbelievable. Thousands of cars followed Dom's crew, and thousands of guys with bullets and automatic weapons fired at them, but nothing happened to them. No one was hurt in any way. Are they immortals? I felt the absence of screenwriter Chris Morgan as the structure and storytelling were sloppier to the overall detriment of the film.

Sure no one watches FF series expecting amazing plot, but surely it is now pushing the boundaries of ridiculous. I did enjoy the previous films just as silly action flicks but this one had me sighing in disbelief midway through.

To some degree, with maybe the exception of Tokyo Drift and Fate of the Furious, I've enjoyed these Fast and Furious movies. Yes, they are dumb and have over-the-top action, CGI-generated, scenes yet despite that found them to be mindless entertainment with the only merit being the chemistry with the cast. However, with Fate of the Furious and the absence of Paul Walker, the series lost that aspect. Walker wasn't a great actor but he and Diesel were great together, along with the others in the ensemble where I could overlook the stupid moments. This ninth entry, as most sequels do, takes it to the next level of absurdity but this time I really could not care less about anything going on. The action scenes were pretty lame and even though it was a joke taking the movie into space, I didn't think they'd actually do it... I could only shake my head at that sequence. Then there's the whole bringing Han back to life. They have now retconned his scene for a second time and somehow, despite this being an outlandish franchise, cheapens any character development for Deckard Shaw (his entire reason for "killing" Han was out of revenge for putting his brother in a coma, although IIRC initially Owen Shaw was thought to have been killing in Fast Five). They try to add some BS depth with faith and, of course, FAMILY, that doesn't land. Hell, there's even discussion from Roman (Tyrese) about being invincible played as a joke only to come true once he and Tej go into space to stop a satellite and actually f'ing survive. The film also is a greatest hits with the return of characters from previous entries including Helen Mirren, Lucas Black, Kurt Russell, Charlize Theron, Shea Whigham (had to look him up, he was in Furious 6), Sung Kang, Shad Moss (aka Bow Wow), etc. Plus Jason Statham makes an uncredited cameo. Boy, yeah the Fast franchise jumped the shark a while back but this one is on the bottom of the list. I don't know how they will right the ship with #10 (and supposedly the last) but the issue with these sequels is they have to top the previous no matter what. Dumb is fine. Lazy not so much. **2.25/5**

Good movie about street racing became ridiculous and disgusting mess for brainless people, who continuing financing producers of this garabage.Calling this movie is insult for the word of MOVIE.Producers of this content should be legally charged for the crime against humanity.

This franchise was about street racing and now all of a sudden after 8 installments its about the same crew of below average actors trying to save the world from evil. If you want to see a bunch of people saving the world with their anti-physics and doent-make-any-sense sort of stunts, i'd recommend you put your 30 dollars on something like Batman or Superman because this film is wrong in so many ways that i dont even know from where to start.

Bad. Bad bad. Even by Fast and Furious standards this is bad. It's like someone wrote (bad) dialogue for a bunch of random scenes, smashed them together with some car scenes and CGI, and hoped a coherent movie would appear. No plot. Bad dialogue. Incoherent plot. I kept hoping it would end....