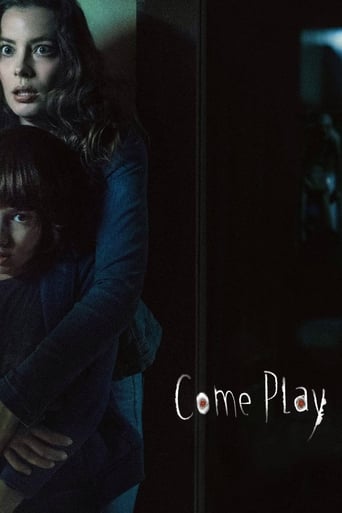 A lonely young boy feels different from everyone else. Desperate for a friend, he seeks solace and refuge in his ever-present cell phone and tablet. When a mysterious creature uses the boy’s devices against him to break into our world, his parents must fight to save their son from the monster beyond the screen.

Oliver is a lonely young boy who feels different from everyone else. Desperate for a friend, he seeks solace and refuge in his ever-present cell phone and tablet. When a mysterious creature uses Oliver's devices against him to break into our world, Oliver's parents must fight to save their son from the monster beyond the screen.

If you enjoy reading my Spoiler-Free reviews, please follow my blog @ https://www.msbreviews.com 2020 is undoubtedly one of the worst years ever for movies, not even in terms of quality, but the infinite delays of highly anticipated films automatically make this year more underwhelming than what it would ever be. Nevertheless, it still delivered a few surprises along the way. Movies that I wasn't really expecting to like as much as I did (Underwater, The Call of the Wild), or even films that I knew I'd enjoy them but eventually end up absolutely loving them (The One and Only Ivan, Palm Springs, The Personal History of David Copperfield). Jacob Chase's feature directorial debut is amongst the former group. I only knew the premise and the cast, which I have to admit didn't really convince me, but I still gave it a go since this could be my last trip to a film theater this year… If it ends up truly being my last time watching a movie on the big screen this year, then it's a wonderful final film. Come Play is one of the biggest surprises of 2020. There are so many aspects that I absolutely love about it, but it doesn't escape from several issues as well. I'll start with the impressive performance of Azhy Robertson (Oliver) as a non-verbal autistic kid. As someone who has shared some time with a young autistic girl, I left the theater fully believing that Azhy was, in fact, autistic in real-life (I didn't recognize him from Marriage Story). I was mind-blown when I found out he wasn't. His display feels so realistic and authentic that I never thought his portrayal was pure acting. John Gallagher Jr. (Marty) is really good as well, but he doesn't have as much screentime as Gillian Jacobs (Sarah). The latter isn't exactly awful, but she definitely disappoints in the more sentimental moments. She's great during the horror sequences, adding to the suspenseful atmosphere, but when the time comes to really deliver heartfelt dialogues and passionate expressions, Gillian fails to offer a convincing performance. The other kids in the movie are also quite cringe-worthy, but not every young actor can be incredible at such a young age. Despite the cast's irregular interpretations, none ruins the captivating story behind Larry, the "misunderstood monster" on the other side of the screen. The social commentary is loud and clear, giving the film a whole other layer. Jacob Chase's commitment and dedication to this work (based on his own short) are palpable throughout the runtime, visible through the numerous tiny details spread across each storyline. I found myself astonishingly invested in the narrative. However, Chase often repeats scenes meant to pass that social message he so desperately wants to transmit, transforming many scenes that could be genuine into something extremely forced. This last aspect is compensated with innovative horror sequences with highly creative use of today's technology to generate an incredibly tense environment. There aren't many jumpscares, but most are pretty effective. Nevertheless, it's the suspenseful atmosphere throughout the entire movie that elevates the overall horror vibe. Chase also employs long takes, which ultimately leaves viewers at the edge of their seats due to some excellent camera work (Maxime Alexandre) and seamless editing (Gregory Plotkin). I really like the score (Roque Baños), but there are a couple of moments where the almost silent music weirdly becomes an adventure tune. Another brilliant technical decision comes from Chase's work with the VFX team. As expected from a low-budget production, the visual effects would never reach today's standards if they decided to show the monster in plain sight during daylight. If you go into the film expecting a monster movie where the latter is the protagonist, forget it. The crew was intelligent and humble enough to acknowledge the not-that-good VFX quality, so Chase "hides" the monster with low lighting and "shows" him during night sequences and/or through a smartphone/tablet's camera. It might be a disappointing aspect for many people, but I was delighted with this smart decision. It's more of a family drama than a generic horror flick. There's a fair attempt at delivering something special, and I do believe it was very close to being one of the best films of the year. The treatment of the autistic character is near-perfect. I love the fact that not only the movie shows every problem that a condition like this brings, but it also demonstrates the extraordinary qualities that autistic people possess. Even though he cannot speak, Oliver is exceptionally clever, fun, and brave, something I believe most of today's society doesn't think autistic kids can be. The ending is both bold and surprising, finishing on a significant emotional moment that will leave viewers with a bittersweet reaction. In the end, Come Play is one of my favorite surprises of this year. Jacob Chase proves that he's a dedicated filmmaker who knows his craft. With exceptional preparation, Chase presents an extremely captivating narrative, distinct from the generic horror flicks that flood every year. By focusing on the emotionally compelling story instead of the formulaic jumpscares, the horror sequences have a much more significant impact due to the viewer's connection with the main characters, especially Azhy Robertson's. The latter delivers one of the best young performances of 2020, interpreting an autistic kid with remarkable authenticity. However, the rest of the cast is not up to the task, especially Gillian Jacobs, who disappoints with an overall emotionally underwhelming display. The social commentary is important and efficiently transmitted, despite Chase eventually losing his balance and exaggerating the number of scenes that ultimately become forced. Technically, the suspenseful atmosphere steals the spotlight from the few yet effective jumpscares. Ends with a surprisingly bold, emotionally bittersweet moment. As long as you don't expect a "monster flick" packed with predictable scares, I sincerely recommend it to anyone looking for a Halloween plan. Rating: B+

While the movie is definitely derivative (i.e. "The Babadook" on a phone), the acting is above average, the creature effects are not bad, and there are a few cleverly done creepy scenes using the device's camera. I'm not sure why they made Oliver an autistic pre-teen, but actor Azhy Robertson makes it believable. And is it just me, or is anybody else sick and tired of "school yard bullies harassing the child lead" trope?!? In the film's climax, there is a scene that took my by surprise in a good way (I've seen it all so I give any film kudos if it can pull that off). That actually had me take another look at the movie and I liked it more.

And the acting police. 1. For all the crappy movies I have to wade through to actually find something worth watching these days is like finding a particular needle in a stack of needles. 2. This movie had an original plot, decent acting (despite what another "reviewer" had complained), it was creepy, and you didn't know the ending 30 minutes into it. 3. I gave this movie an eight because it's actually one of the better creepy movies I've seen in three months. I don't know about all of you, but indie movies are starting to grind on my nerves. I have to turn on the subtitles because I can't understand what they're saying most of the time. And then you have these user reviewers who critically acclaim movies where there's some hidden meaning in the ending that leaves you asking, "wtf was that and why did I just waste ninety minutes of my life I'll never get back to watch that bunk?"So, this movie is not fantasy as another review suggests. It's a very decent horror movie that I think most people will enjoy.

I think this was a good horror movie, which had something new in it that kept it interesting. The general presentation was very good.The pacing is a slow burn with more and more weird stuff happening as it goes on, which I liked a lot. Being someone who hates jump scares I was glad this one didn't really have any. The horror aspect was well done but some might find it mild maybe, and it was scary.I like that there seems to be an allegory happening in the background of technology causing people to become more isolated and lonely; which of course is sad but true. The demon could be interpreted as a representation of loneliness perhaps as you get older.I'm not sure why this one was lower on the ratings, but I think it is underrated and I enjoyed it.7/10 a good novel horror.

While we all want something terrifying from the horror films we watch, it is nice to get some psychological and emotional aspects intertwined within the scares to give it that extra depth. This particular story is very reminiscent to Mike Flanagan's style where he places just as much importance into the heart and soul of the characters as the amount of detail in the creepy creatures or hauntings. It's definitely a great and promising first feature effort from Jacob Chase.The film still does have its classic clichés with many predictable timed jump scares and the all too common tech themes of late , but it still wraps everything together nicely with some interesting concepts. There are some tremendous moments of authentic emotion portrayed by the main actors as well which is an underrated aspect especially in horror films. There's also a very interesting entity with a great backstory with some decent enough CGI to present it. The atmosphere and tension is prevalent and there are some clever camera choices.Overall it's way better than many will think it will be after seeing the very cliche trailer, and people shouldn't take it for just a kids horror. If this is the one wide release horror film we get for Halloween, it does serve its purpose well enough.