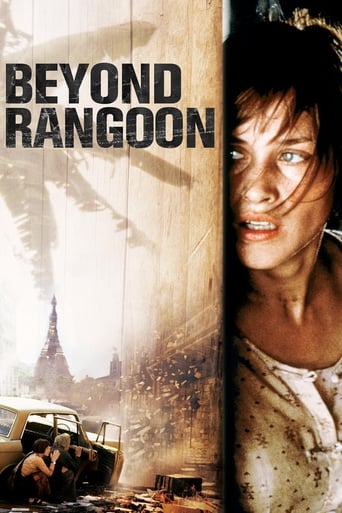 Patricia Arquette stars as American widow Laura Bowman, a young doctor who's unwittingly drawn into political turmoil while vacationing in Burma in the late 1980s, in this fictionalized drama based on actual events. Bowman initially left San Francisco with her sister (Frances McDormand) in an attempt to escape painful memories of her husband and son's violent deaths. But her fight to escape to Thailand could prove just as harrowing.

Laura is trying to pick up the pieces of her life after the murder of her husband and son| and goes on vacation with her sister to Burma. After losing herpassport at a political rally| she is left on her own for a few days| during which time she falls in with students fighting for democracy. She and their leader|U Aung Ko| travel through Burma| whilst witnessing many bloody acts of repression by the dictatorship| in an attempt to escape to Thailand. Based on a truestory.

Downloading Seeding Beyond.Rangoon.1995.WEBRip.x264-ION10 from to 0 peers.
of
↘0 b/s / ↗0 b/s
Read our blog post about Streaming Torrents From Your Browser