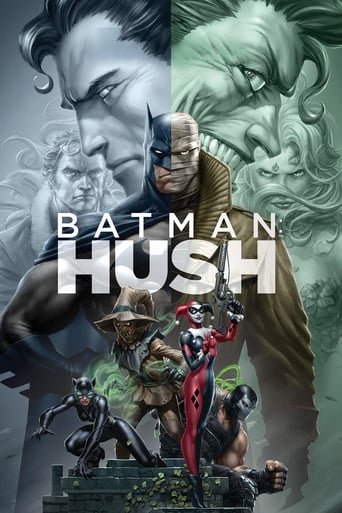 A mysterious new villain known only as Hush uses a gallery of villains to destroy Batman's crime-fighting career as well as Bruce Wayne's personal life, which has been further complicated by a relationship with Selina Kyle/Catwoman.

BATMAN: HUSH is a thrilling mystery of action, intrigue, and deception based on the New York Times bestseller of the same name penned by Jeph Loeb (Batman: The Long Halloween) and illustrated by comics superstar Jim Lee (All Star Batman & Robin, The Boy Wonder). Batman sets out to discover the identity of a mysterious mastermind using the Joker, Riddler, Ra's al Ghul, and the Dark Knight's other enemies and allies as pawns in a plan to wreak havoc. It's been a while since DC has brought out something that's better than passing grade, but _Hush_ was honestly kind of great. Even with the pretty massive deviation from the source material. _Final rating:★★★½ - I really liked it. Would strongly recommend you give it your time._

Okay DC animated movie that has its moments, and nice animation, but as a fan of the original graphic novel, was a little disappointed, though not entirely surprised they went the route they did considering how much back story was involved with the source material, so changes had to be made. Still, was entertaining enough but not top tier amongst the DC Animated Universe.

Not quite as stupid as a lot of the Batman cartoons of late, but that's not to say it doesn't have a more than a little eyebrow raising nonsense. I guess that's a step in the right direction? Really this movie is a 6 at best, but I gave it an extra point because recent history has shown that it could have been considerably worse. I was not previously aware of the Hush story arc this was based on. I was not impressed with the third act, though I kept that out of my scoring. I just felt like the stage was set for it to be so much more, but I assume the story was laid out in the comic. It really didn't help that third act also comprised most of the "stupid", which would have definitely NOT been in the comics.