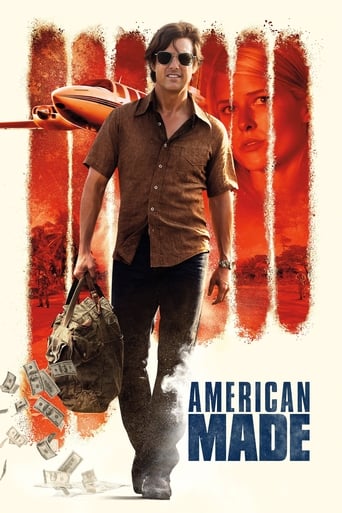 The true story of pilot Barry Seal, who transported contraband for the CIA and the Medellin cartel in the 1980s.

Barry Seal was just an ordinary pilot who worked for TWA before he was recruited by the CIA in 1978. His work in South America eventually caught the eye of the Medellín Cartel, associated with Pablo Escobar, who needed a man with his skill set. Barry became a drug trafficker, gun smuggler and money launderer. Soon acquiring the title, 'The gringo that always delivers'. _American Made_ is a peculiar film, but a very enjoyable one. It takes a playful, satirical look at the origins of the notorious 'Iran-Contra' affair, through the eyes of pilot Barry Seal. Along the ways we get thrills, laughs, astonishing (true-life) twists and turns and some vivid characters. Even if you followed the public Iran-Contra scandal, you may be unfamiliar with the story of Seal, who started running guns for the CIA years before the familiar public scandal erupted. American Made is a fast, breezy, amoral look at the ins and outs of a covert operation made to go wrong. There's no judgment here; in fact, we come to like Seal's crazy make-it-up-as-you-go-along approach to flying, to crime and to life in general. Tom Cruise is perfectly cast as the cocky, reckless pilot. I've done a fair bit of flying, and I've met one or two hot-shots like (in a lesser degree) the one Cruise portrays. Cruise has lately been playing parts that are much too young for him (e.g. _Jack Reacher: Never Go Back_), but his age works well in this case. In a way, Seal is a guy fighting to stay young. If there's one there's one thing to regret about _American Made_ it's that it carefully avoids most of the political backdrop. We're told that the Sandinistas were evil Russian-backed Communists, which is undoubtedly what the CIA would have said at the time. (Hindsight is more ambiguous.) We're shown, just barely, how the Reagan administration evolved a cockeyed criminal scheme for its own ends, but the film ends where the public Iran-Contra scandal began. Ollie North is a presence in only one or two shots. Nonetheless, Barry Seal's personal story arc is wrapped up perfectly. The ending doesn't let anyone off the hook, but it does leave us questioning our own moral position, as we're inevitably drawn to like and admire Barry Seal, in spite of his total lack of scruples or judgment. Doug Liman directs with his usual flair. He's had a remarkably varied career, ranging from spy-action (_Bourne Identity_) to superheroes (_Jumper_) to political drama (_Fair Game_) to straight-up sci-fi (_Edge of Tomorrow_). _American Made_ stands up very well in that catalog. It's a fun film, a thoughtful film, an unusual film... though its darker side may not appeal to every taste.

Downloading Seeding American Made (2017) [YTS.AG] from to 0 peers.
of
↘0 b/s / ↗0 b/s
Read our blog post about Streaming Torrents From Your Browser